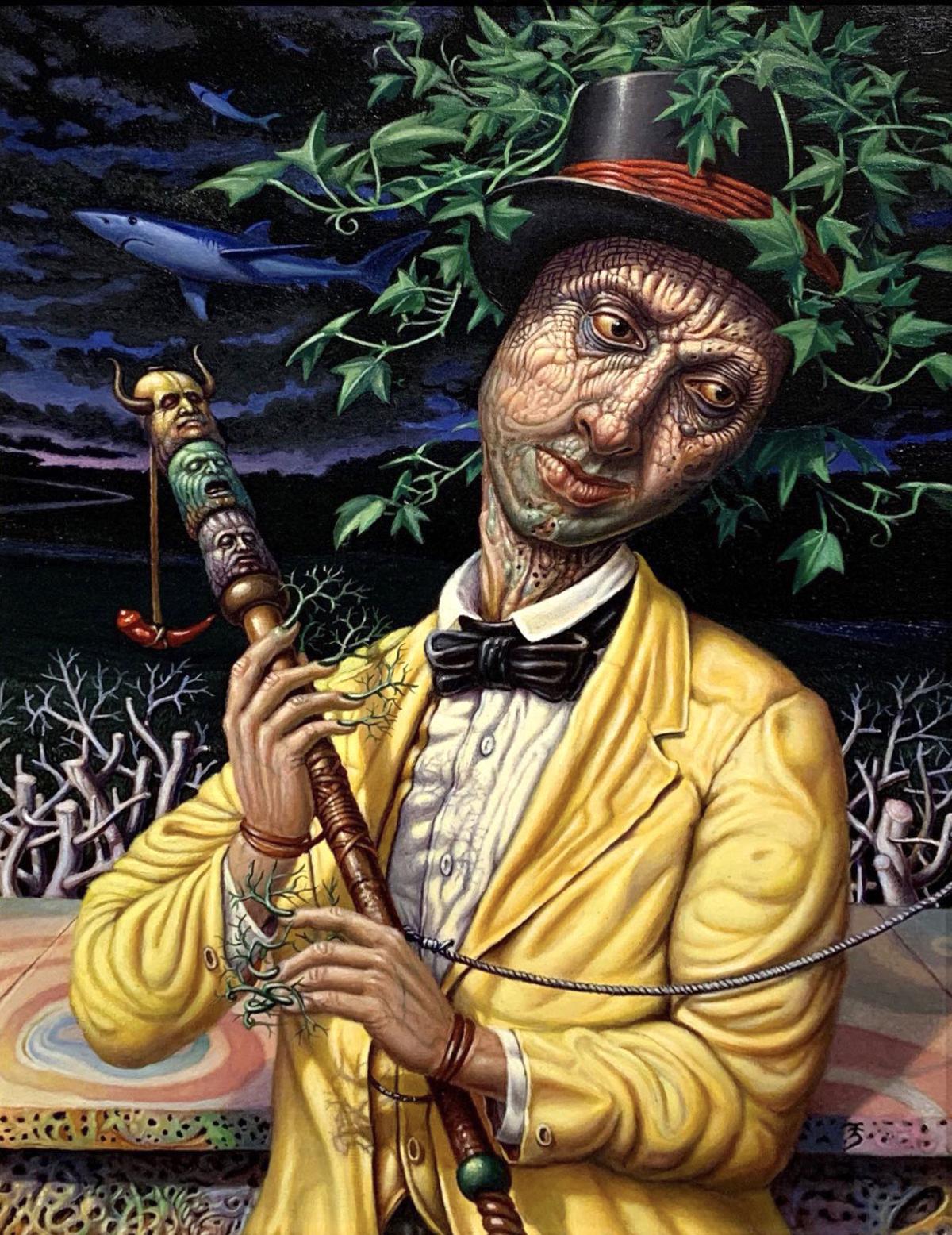 “Self Portrait with Hands Tied” by Tim French 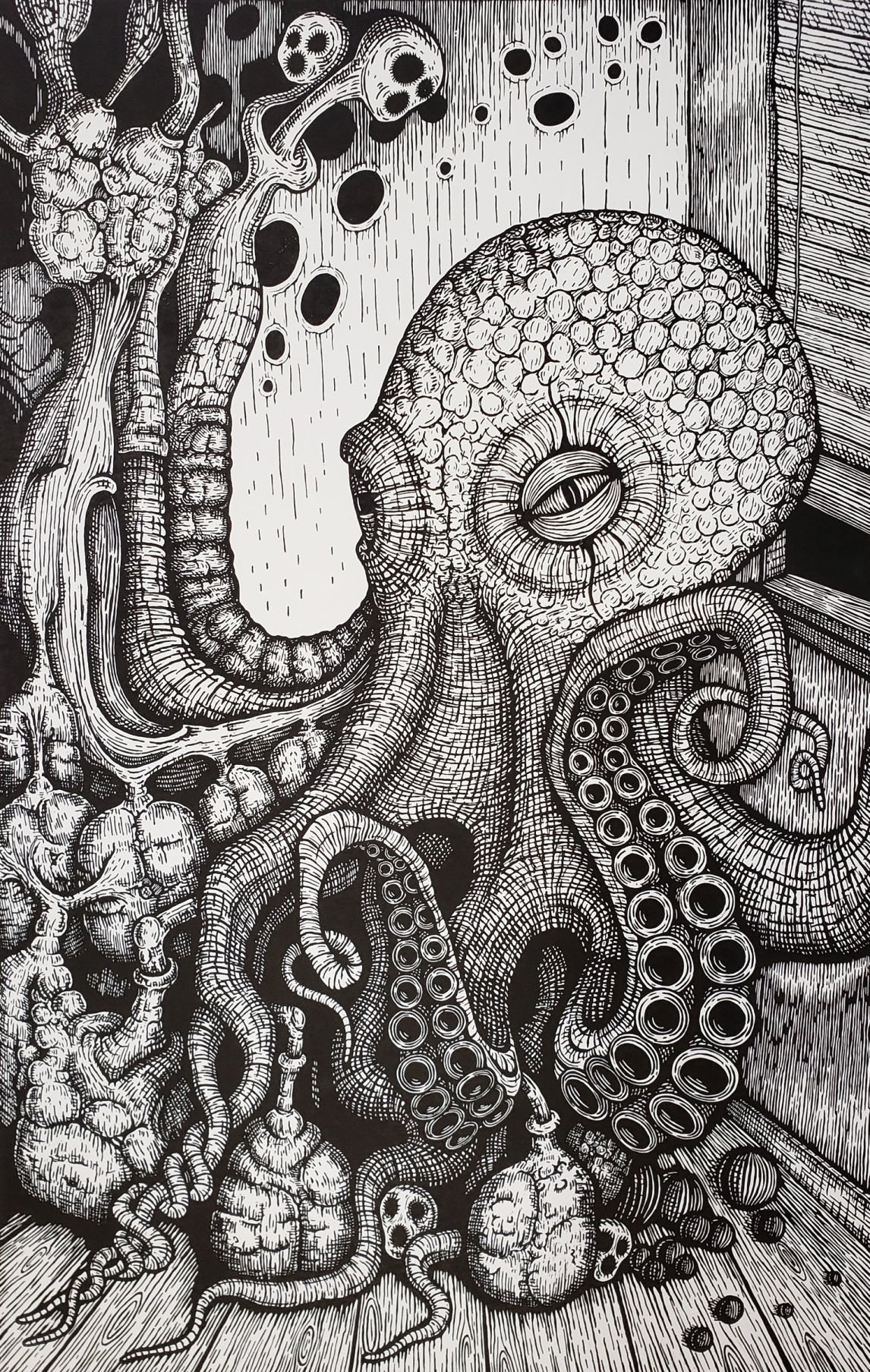 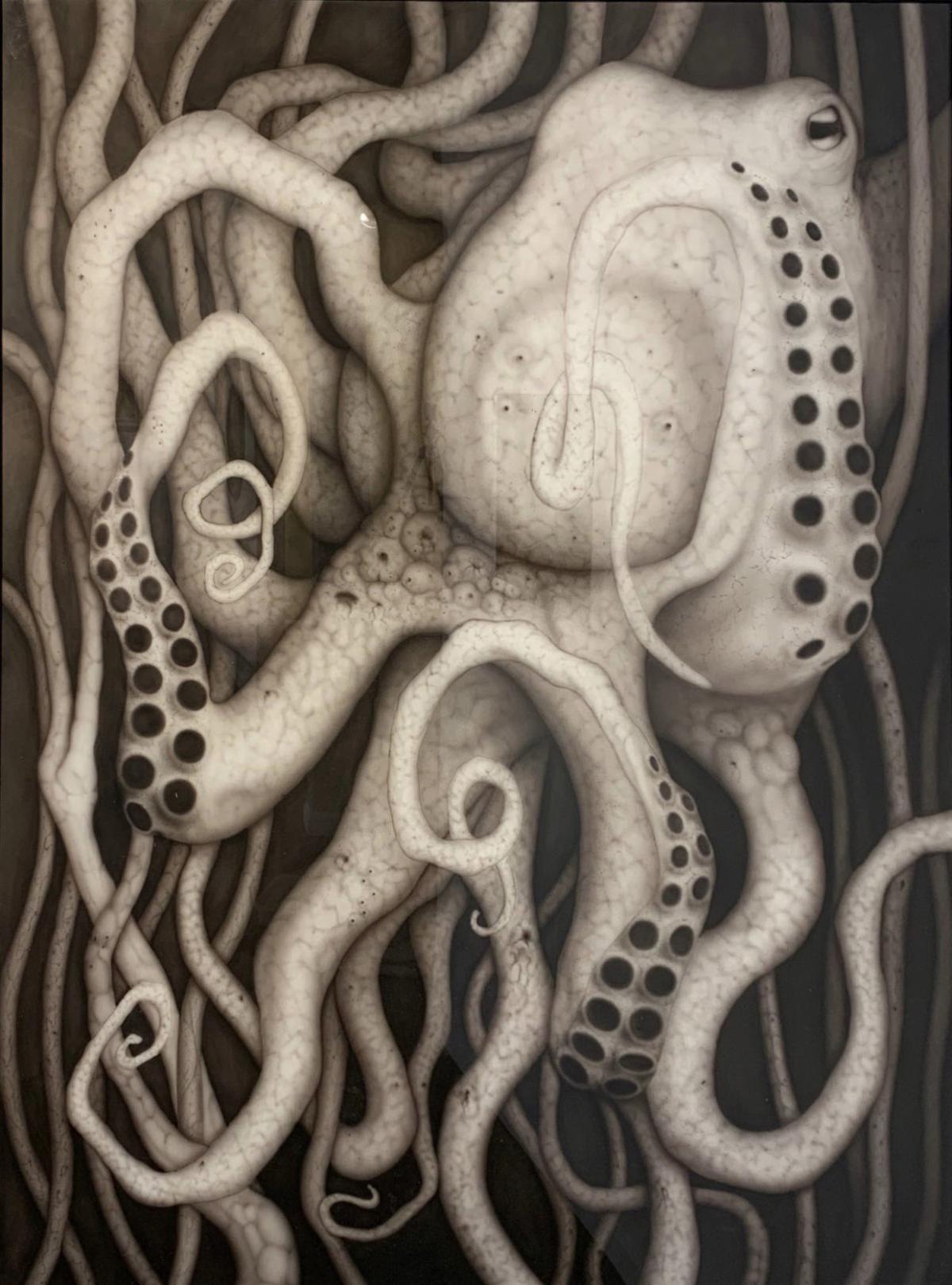 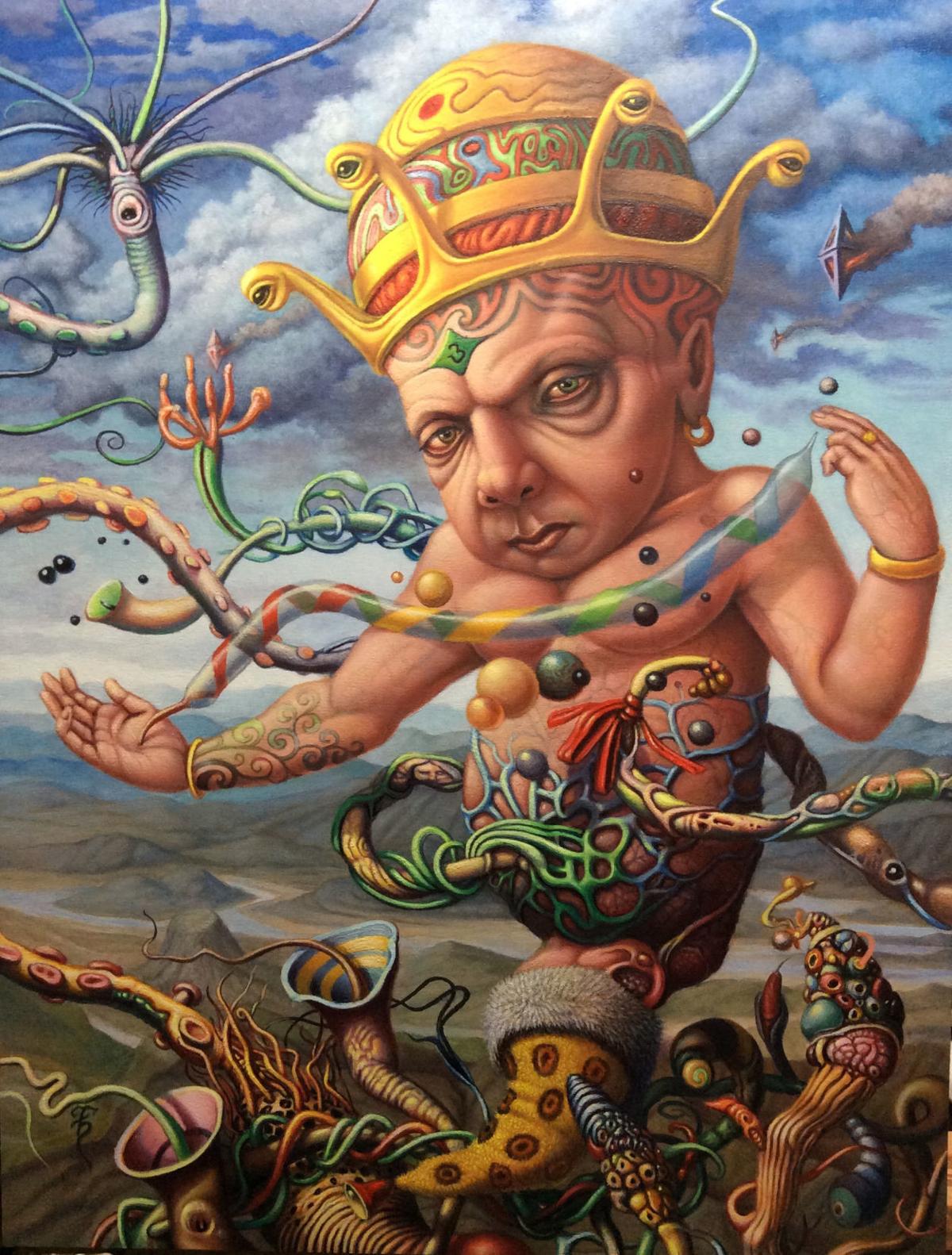 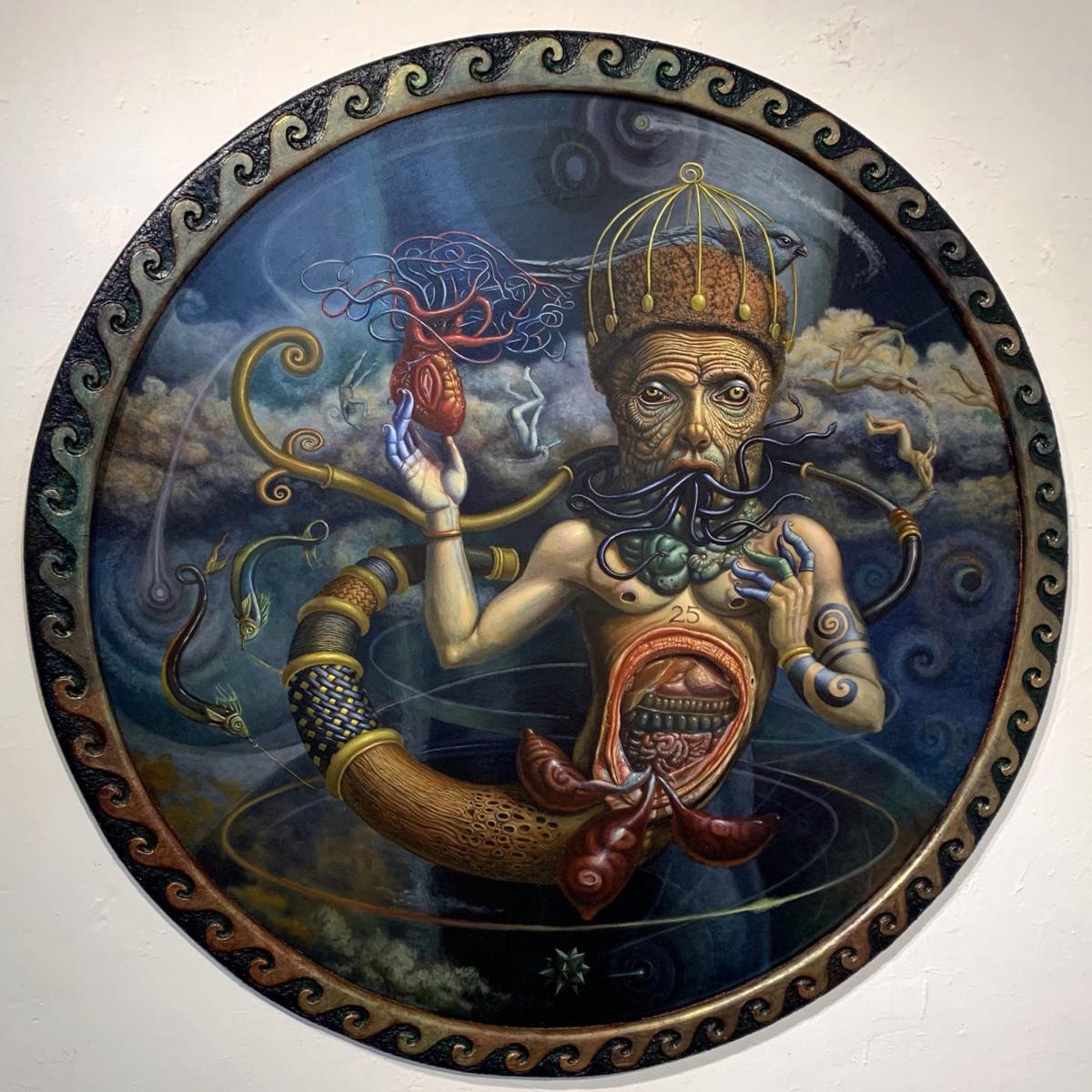 “Self Portrait with Hands Tied” by Tim French

Tim French relies on dream imagery and intuition to summon “the irrational and sometimes dangerous aspects of my personality,” he tells viewers in a brief statement about his work.

This approach is vividly manifested in his duo exhibition with fellow North Carolina artist Marc Roche at Delurk Gallery.

French is a highly skilled painter who brings all of the traditional Western art techniques to bear in his work, and who doesn’t flinch from images that many viewers will find disgusting and horrifying.

Highlighting this remarkable exhibition is his circular painting “Go Devil.” It portrays a fearsome-looking figure that’s half-serpent and half-humanoid, with a gruesomely wrinkled, emotionless face and a bare torso ripped open to expose glistening, internal organs. A dark bird perches atop the figure’s oddly configured crown, and shiny black snakes slither from its open mouth. Holding a freshly excised heart in its upraised right hand, this demonic figure floats in a dark sky suffused with ominous-looking clouds from which several naked men and women in the middle distance appear to be falling.

A counterpart of sorts is French’s smaller painting titled “Rex,” whose central figure also wears a distinctive crown and possesses only the upper half of a human body — that of an infant in this case. Judging from the drugged, jaded-looking expression on its face, this creepy-looking royal baby is anything but sweet and innocent. With its lower body stuffed into a fuzzy-looking yellow garment that suggests an inverted elf’s hat, it hovers among vaguely intestinal-looking, floating forms in a cloud-dappled, blue sky overlooking a mountainous desert landscape.

“Self Portrait with Hands Tied” reveals something of the way French sees himself and his relationship with his art. He appears in the guise of a rather downcast-looking dandy wearing a yellow jacket and a red-banded, black top hat. His pallid face is extremely wrinkled, like that of a desiccated corpse — and like most of his other humanoid subjects. His hands, meanwhile, are literally tied to the black walking cane he brandishes like a vaudeville entertainer — clearly an emblem of his creative practice. The telling detail is the cane’s handle, carved in the form of a miniature totem pole consisting of three grotesque heads.

Disturbing visions like those French paints reside in everyone’s mind, most often emerging in nightmares or disturbing thoughts that are quickly self-suppressed. Armed with his formidable painting skills, French coaxes these visions out into the open and confronts them head-on, like a great maker of horror films. His ultimate goal, his statement tells us, is “ to examine, understand and positively integrate the rational and irrational aspects of my personality.”

Roche’s creative affinities with French — including impressive technique and bold imagery — are such that their work seems appropriately paired. Like French, Roche finds inspiration in “Dreamlike states and the irrational,” according to his artist’s statement. But while French is more internally focused, Roche sees his art as “an expression of the world around me and the way the people, places, and situations filter into my own experience.”

Roche’s half of the show is more technically wide-ranging and his palette is more subdued — and more “goth” — dominated by the black-and-white of his intricate linocut prints and the shades of sepia and gray in his drawings. Animals including monkeys, elephants, and octopi serve allegorical roles in a number of his works.

Among his most compelling works are three large (roughly 4-by-3 foot) but delicately rendered, mixed-media drawings that conjure a shadowy, subaquatic realm of snakelike forms coalescing into tentacles in the one titled “Entangled.” Its subject is an octopus, so tightly framed within the edges of the paper that it looks boxed in. It’s an effective metaphor for the human mind — the artist’s mind — submerged in a vast but dark sea of consciousness but contained within the limits a mortal body.

Roche used an airbrush to achieve some of the effects in this trio of images. He met a very different set of technical challenges in his hard-edged, sharply defined linocut prints, including a thematically related one that also depicts an octopus in tight closeup.

Extending the metaphor in the previously described drawing, this octopus occupies a domestic interior space — a corner of a room with a wooden floor and a window covered with Venetian blinds. One of its eyes appears to stare directly back at the viewer, and its tentacles seem to be undergoing strange transformations, morphing into elephant trunks, treelike branches, disembodied brains and intestinal forms with tiny human skulls peeking out here and there.

The humorously revealing title takes the form of a question: “How am I to fathom your mind if you continue to hide it from me?”

Roche’s technical versatility is demonstrated with the inclusion of several paintings, mainly small, cartoonish portraits of creepily wide-eyed characters. There’s also a larger painting of three figures including two skeletons and a mysterious, central figure in an elaborate leather costume with a bat-winged cape and an all-over mask that sprouts several branches fro the top, like Medusa’s snakes. Standing among a patch of sunflowers, they suggest participants in a Day of the Dead pageant or masked ball, but the title reveals their source — “I Dreamt of Flying in the Unfurling Infinity.”

Hanging alongside French’s paintings, they beg a comparison, and the competition could hardly be tougher. French’s paintings are more vivid, more disturbingly alive, but overall — with his prints and drawings — Roche holds his own in imposing company.

“Murmurs and Recollections” (whose title sounds like an REM “greatest hits” package) opened in May and was originally scheduled to close at the end of the month. Extending it through June was a wise move, because it’s one of the strongest shows Delurk has presented, and it deserves to be more widely seen.

Who: Tim French and Marc Roche

What: “Murmurs and Recollections"