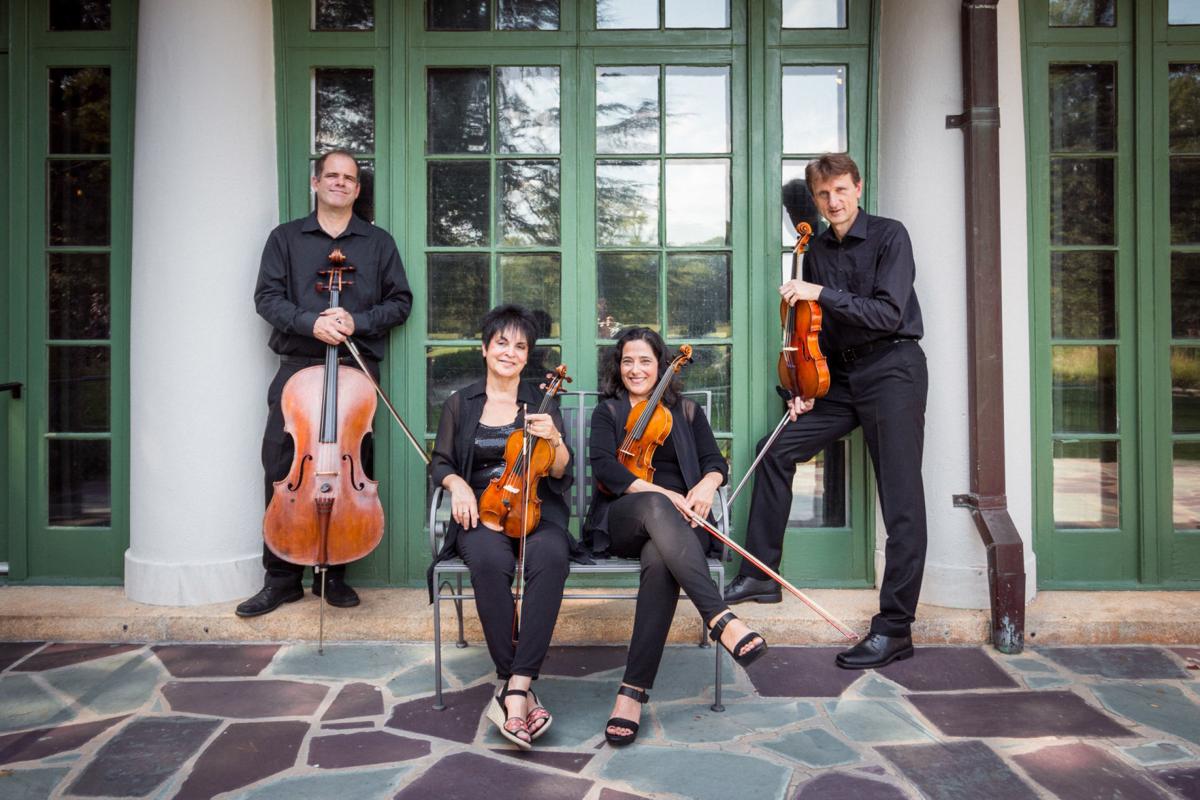 Brooks Whitehouse (from left), Ida Bieler, Janet Orenstein and Ulrich Eichenauer are UNCSA faculty members who comprise the Reynolda Quartet. They will perform their debut concerts Feb. 1 and 2 at in the Babcock Auditorium at Reynolda House Museum of American Art. 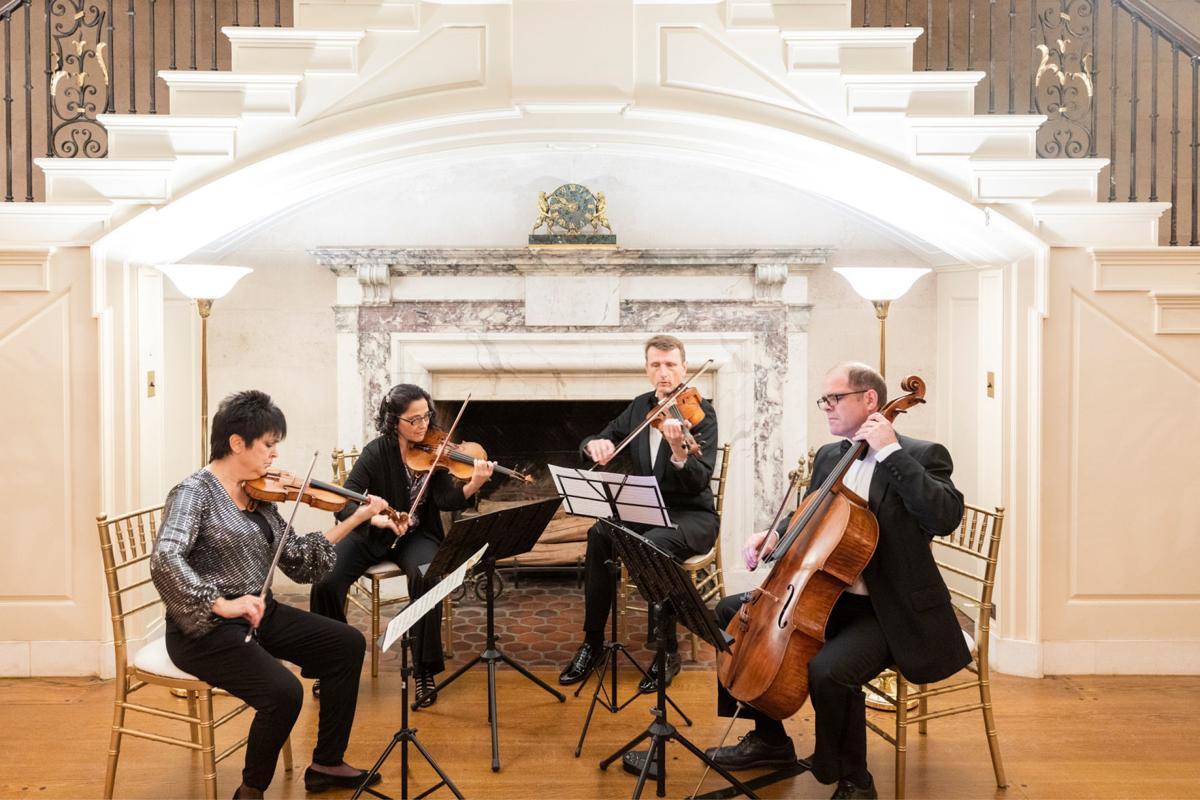 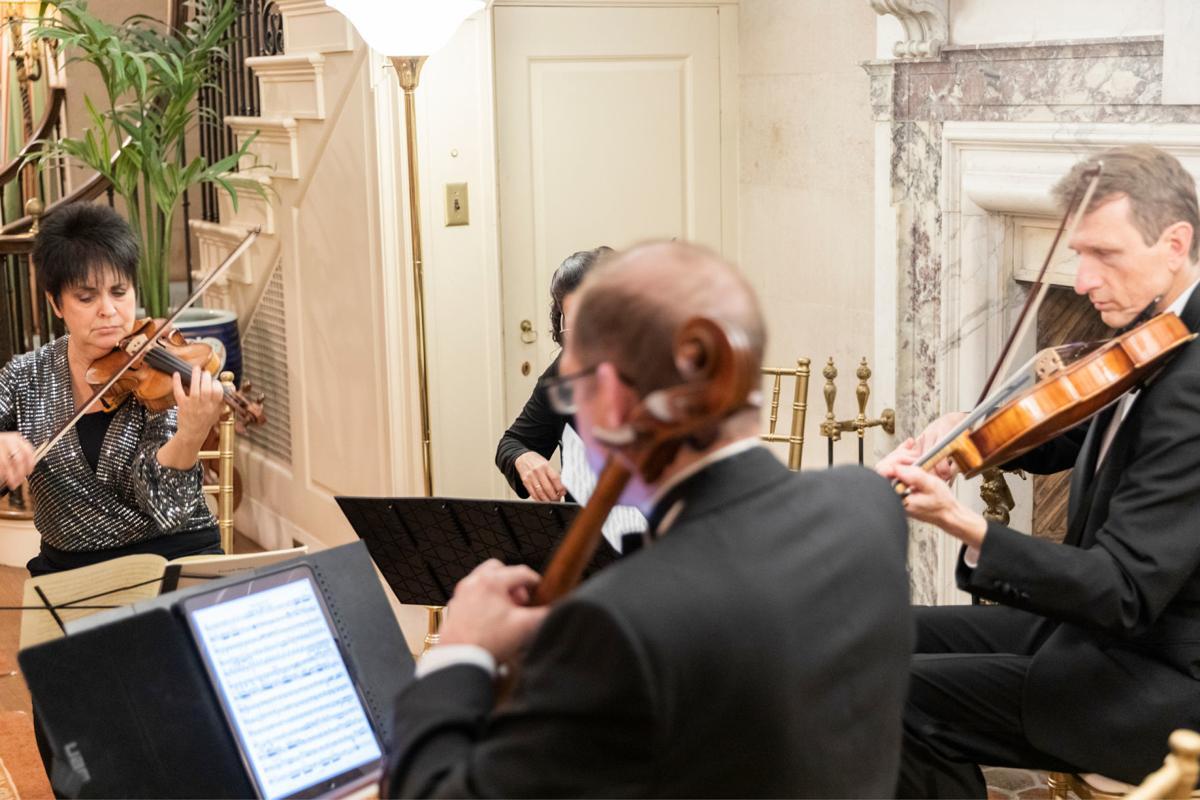 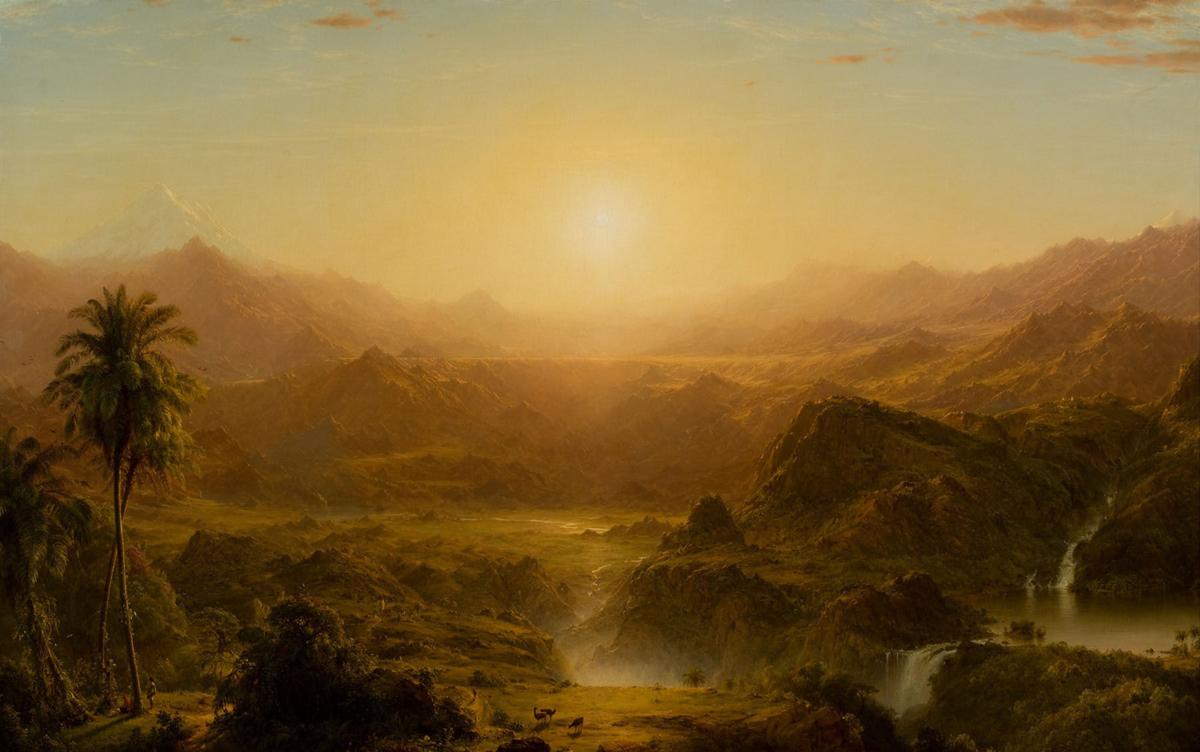 “The Andes of Ecuador,” 1855 oil on canvas, by Frederic Edwin Church (1826-1900), is part of Reynolda House’s permanent collection. It is a favorite of Ida Bieler, violinist with the Reynolda Quartet. 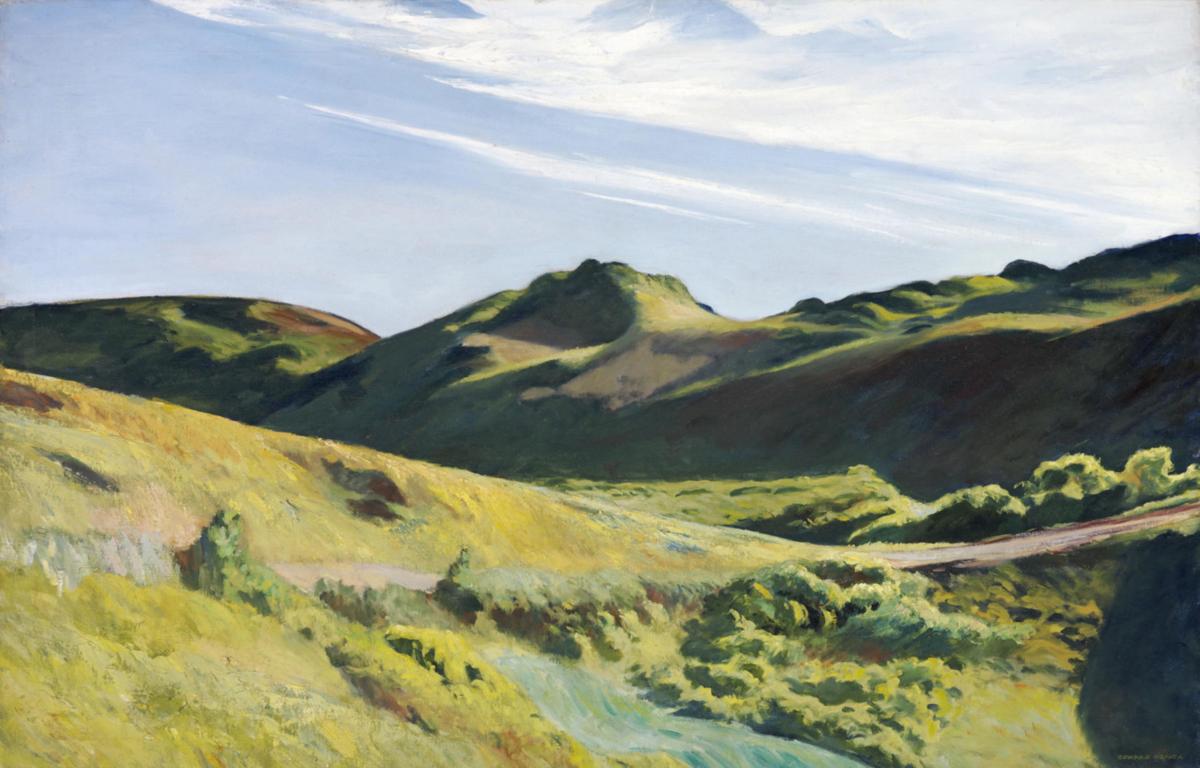 Edward Hopper’s “The Camel’s Hump,” 1931, was at Reynolda House Museum of American Art as part of the visiting exhibition, “Hopper to Pollock,” in the spring of 2019. It is a favorite of Ulrich Eichenauer, violist for the Reynolda Quartet.

Brooks Whitehouse (from left), Ida Bieler, Janet Orenstein and Ulrich Eichenauer are UNCSA faculty members who comprise the Reynolda Quartet. They will perform their debut concerts Feb. 1 and 2 at in the Babcock Auditorium at Reynolda House Museum of American Art.

“The Andes of Ecuador,” 1855 oil on canvas, by Frederic Edwin Church (1826-1900), is part of Reynolda House’s permanent collection. It is a favorite of Ida Bieler, violinist with the Reynolda Quartet.

Edward Hopper’s “The Camel’s Hump,” 1931, was at Reynolda House Museum of American Art as part of the visiting exhibition, “Hopper to Pollock,” in the spring of 2019. It is a favorite of Ulrich Eichenauer, violist for the Reynolda Quartet.

A newly formed string ensemble, the Reynolda Quartet, is uniting UNC School of the Arts and Reynolda House Museum of Art in a unique relationship.

Reynolda House is supplying the venue for the group’s first public concert, set for Feb. 1 and 2 in the Babcock Auditorium, and the musicians, all faculty at UNCSA, are honoring the museum by adopting its name.

“There are so many connections between the arts — Impressionistic music, Impressionistic paintings — so all the periods had their influences together,” said Ida Bieler, one of the group’s two violinists. “For us, Reynolda House is such an important artistic center in Winston-Salem — very intimate, like a string quartet. It felt right in every way.”

The Babcock Auditorium, where the group will play, seats about 175.

Phil Archer, the museum’s deputy director, said, “From its very creation, Reynolda has been a home for music and art. Music, whether classical or jazz, was the primary inspiration for several artists featured in Reynolda’s collection, including Georgia O’Keeffe, Stuart Davis, Romare Bearden and Charles Burchfield.”

Reynolda House’s focus on American art appealed to Bieler and Ulrich Eichenauer, the group’s violist, because they plan to feature contemporary American composers in their concerts. They commissioned “Last Spring,” by Lawrence Dillon, a UNCSA faculty member, for the first concerts at Reynolda.

“That’s going to be a thread running through our programming,” Eichenauer said. “We want to play contemporary American pieces.”

“And we want to inspire them to be commissioned,” Beiler said.

Both Bieler and Eichenauer cited favorite paintings at Reynolda House. Bieler said that she loves “The Andes of Ecuador,” by Frederic Edwin Church, which is part of Reynolda House’s permanent collection. Eichenauer especially enjoyed seeing Edward Hopper’s “The Camel’s Hump,” a centerpiece of the “Hopper to Pollock” exhibition that visited Reynolda last spring.

“Across the centuries, musicians have been inspired by the fine art found in museums such as Reynolda House, just as visual artists are inspired by great music,” said UNCSA Interim Chancellor Brian Cole who is also a musician. “Reynolda House offers a beautiful setting for audience members to enjoy music performed by our world-class faculty artists.”

Bieler is a veteran of the Melos and Heine Quartets, with recordings for EMI Classics, Harmonia Mundi and Deutsche Grammophon. Eichenauer performed throughout the United States and Europe as a member of the award-winning Mendelssohn String Quartet. Violinist Janet Orenstein and cellist Brooks Whitehouse, wife and husband, have toured the world from Turkey to Australia as founding members of the Guild Trio.

“We were very excited to hear that and to see that there was real interest and actually a need for chamber music,” Eichenauer said.

“Uli and I, when we brainstormed so many aspects of this, we had a sixth sense that there would be a great love of this genre,” Bieler said. “Based on our past experience — Uli in the Mendelssohn Quartet, and I have heard from people from all over the community, asking for quartet music — we felt there was passion for this genre of music.”

The pieces on the program are loosely connected by ideas of intimacy.

“The emergence of spring is something that we all count on,” said Dillon, referring to his “Last Spring.” “The piece is about looking back on a lifetime of springs and wondering which one will be the last one, so it’s a combination of the nostalgic and the apocalyptic.”

Coincidentally, it was last spring that Bieler told Dillon that she and her group were forming the Reynolda Quartet and asked him if he had a piece that they could play.

“I said, why don’t I write one for you?” Dillon said. “And it felt so nice to be able to write for colleagues and friends and artists.”

When Leos Janacek wrote his last work, Quartet No. 2, “Intimate Letters,” he was desperately in unrequited love with a woman 37 years his junior. “The four movements, which are played without pause, are letters representing his deep feelings, his anxieties, his fears for her, his passion and love for her. In a way, it was his last spring,” Bieler said. “Which, happily, refers back to Larry’s (Dillon) ‘Last Spring.’”

Johannes Brahms dedicated his “Quartet in A Minor Op. 51” to his friend the violinist Joseph Joachim whose personal motto was “free but lonely.”

“We have intimate thoughts, intimate letters, intertwined here for this program,” Bieler said.

Although the word chamber has come to mean “a large room used for formal or public events,” it originally meant “a private room, especially a bedroom,” according to Lexico.com, and chamber music playing requires close communicatioin among its players.

While Bieler is cited as the quartet leader in a story on UNCSA.com, she and Eichenauer agreed that leadership changes many times during the playing a piece of music.

“Wherever the leading line in the text of the music is determines who is leading,” she said. “As we each study alone and together we are aware of the effect of the leading voice and the effect of the supporting voices or counter voices against it. Music is an enormous puzzle, and it has to be seen on many levels.

“And a leader is entwined with his comrades, with his support system ... and all of it. Even when he is leading, he is not leading a band of ducks, he is shmoozing, he’s loving them all.”

Regardless of who is leading, there is always a sense of cooperation, they said.

“The psychological aspect is that the cello is the foundation on which everything rests, and the first violin plays on top of the text. ... Their role is to assert,” Eichenauer said. “Whereas the middle voices (the viola and the second violin), our role is to question things, to consider.”

Bieler and Eichenauer said that the musicians communicate not only verbally during rehearsal but also musically, in the moment.

“In performance, especially, we have to be with each other each moment,” Eichenauer said. “We can’t just go by what we have discussed in rehearsal.

“Being with each other lets something completely new emerge. Being creative together with spontaneity is the greatest thing. For me, those are the great moments.”

Bieler concurred, “For me too. It’s a privilege to have these colleagues. We are very much motivated from the joy of sharing this wonderful music.”

After their debut performance at Reynolda House, the quartet has planned concerts at the Robert Schumann Hochschule Spring Chamber Music Festival in Düsseldorf, Germany, and Palazzo Ricci, European Academy for Music and Performing Arts in Montepulciano, Italy.