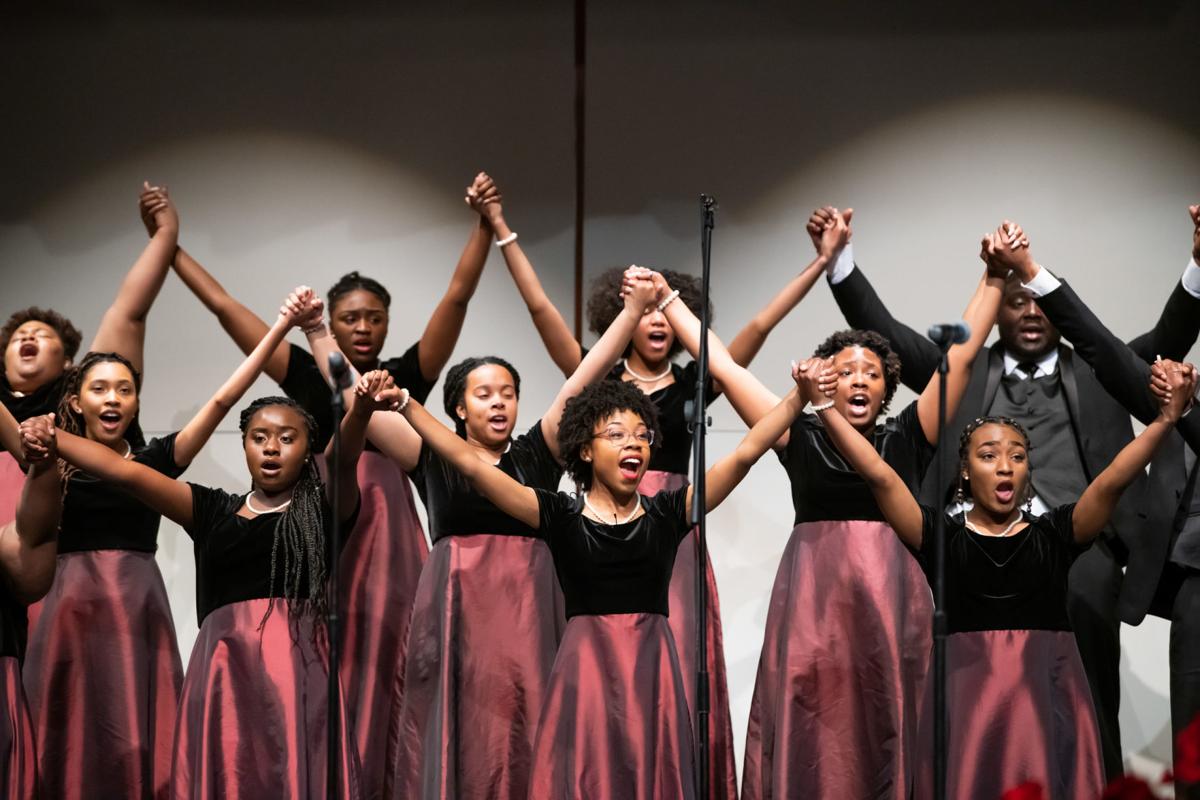 The Singing Rams will perform Dec. 8. 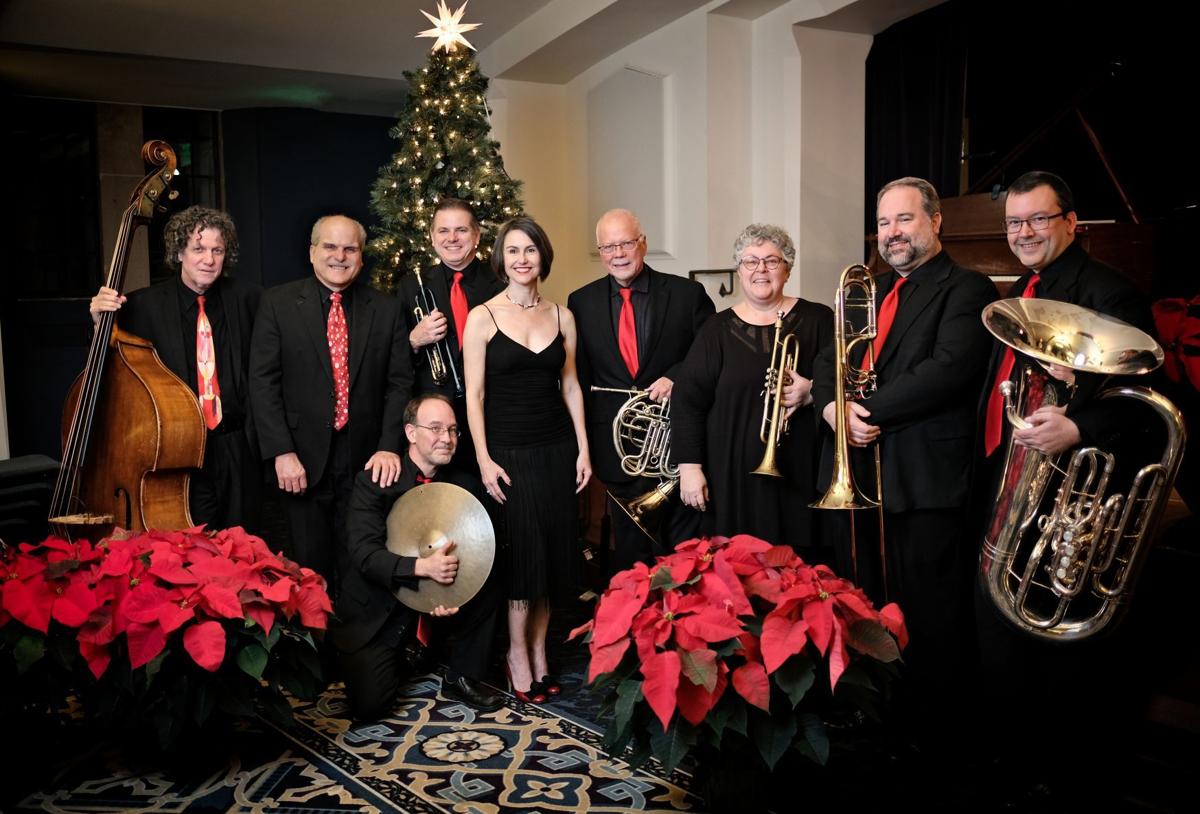 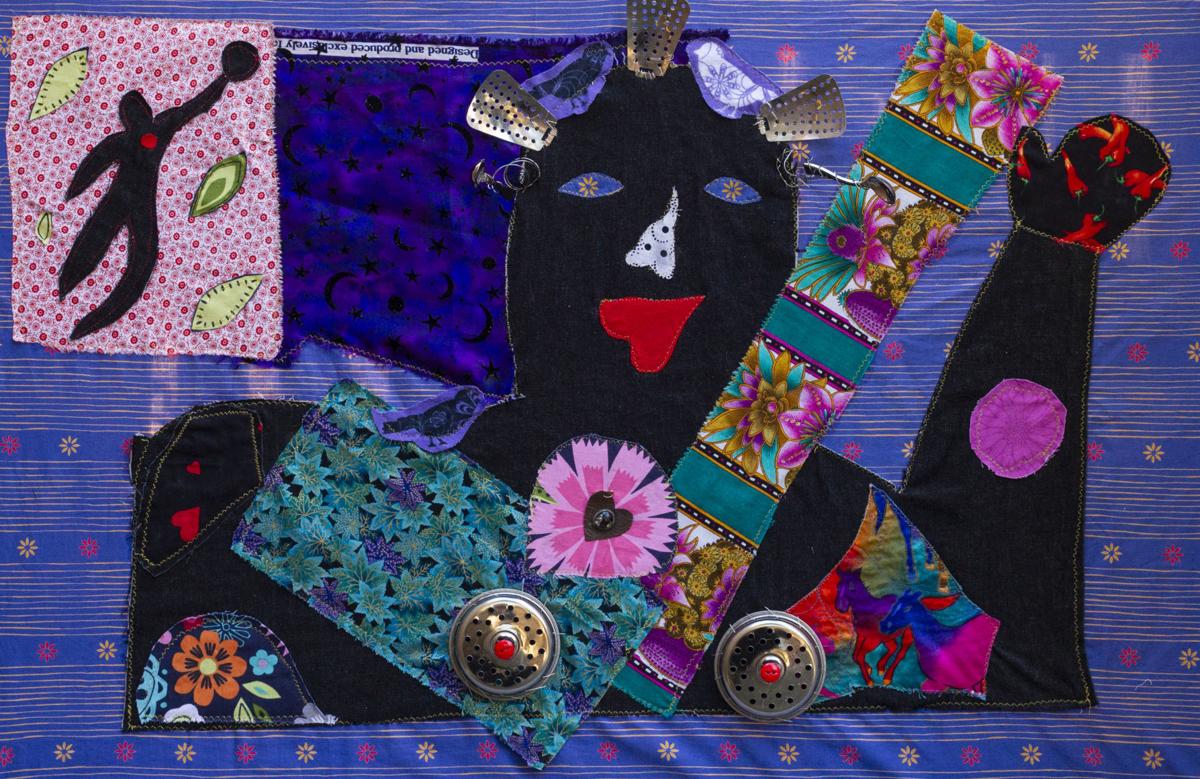 “Kitchen Goddess,” by Jessica Tefft, will be at Artworks Gallery. 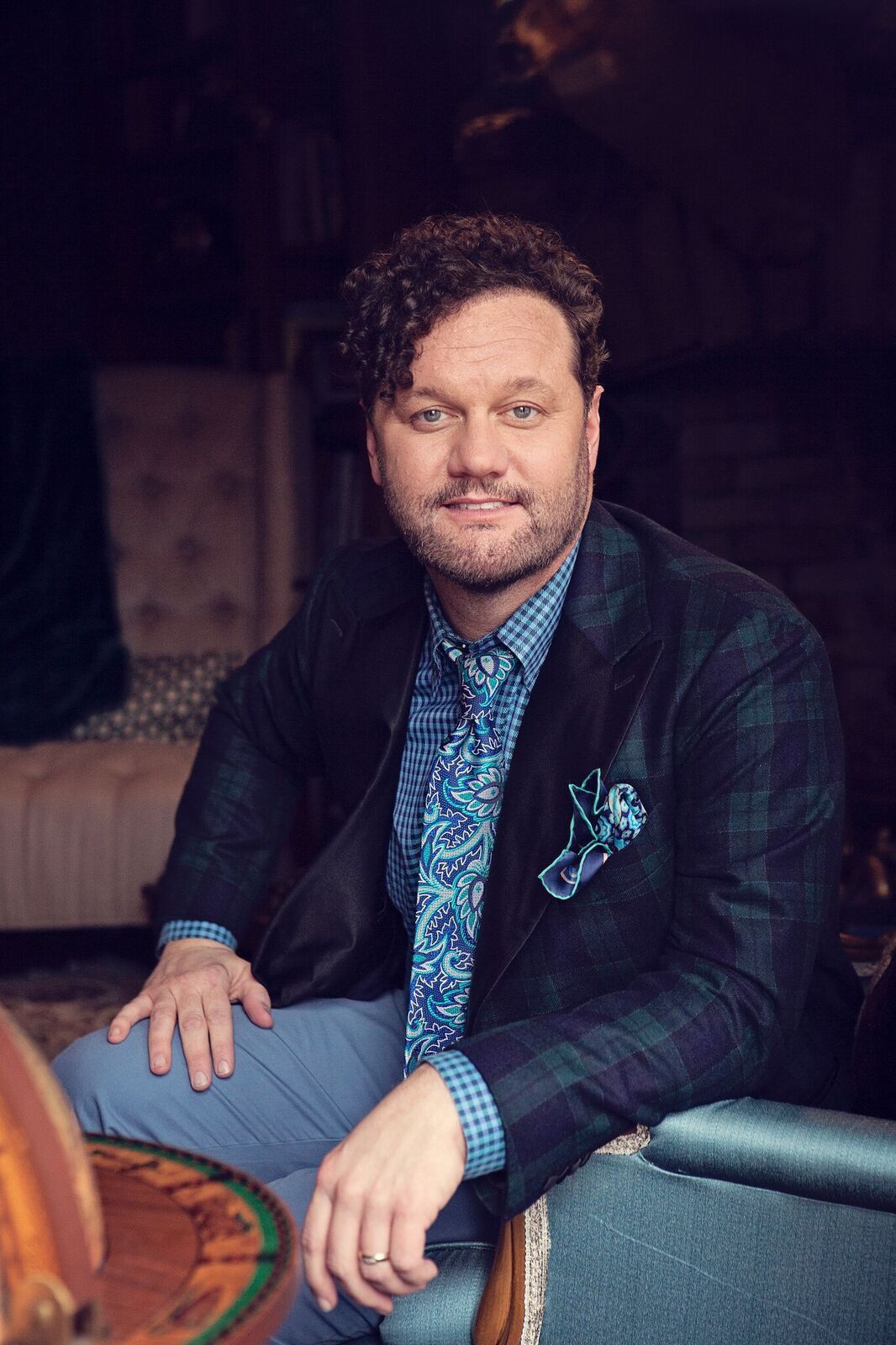 The Singing Rams will perform Dec. 8.

“Kitchen Goddess,” by Jessica Tefft, will be at Artworks Gallery.

The ensembles, under the direction of Michael Magruder, will present holiday favorites.

The annual Singing Rams holiday concert, “The Soulful Sounds of the Season,” will be at 4 p.m. Dec. 8 in the K.R. Williams Auditorium.

The Singing Rams — the Grammy-nominated WSSU Choir, the Burke Singers and the Singing Madonnas — will perform holiday songs as they tell the story of the season. The ensembles have performed nationally and internationally and recorded 12 CDs. Maestra D’Walla Simmons-Burke is director; Myron Brown, accompanist. Soprano Candace Potts of Baltimore, Maryland, is the guest artist.

Admission is free, and donations will be accepted. For information, call 336-750-2525 or email burkedw@wssu.edu.

The 50th episode of New York Times bestselling author Charlie Lovett’s literary podcast Inside the Writer’s Studio, which is produced in collaboration with Bookmarks, will post today, Dec. 1.

The episode will feature internationally bestselling author Robin Cook, who has written 36 bestselling medical thrillers from 1977’s “Coma” to his latest, “Genesis.”

Bookmarks’ social channels (@bookmarksnc) will have a link to the episode as will charlielovett42.podbean.com .

‘Christmas at Reynolda’ planned for December

Reynolda House Museum of American Art will present “Through the Years: Christmas at Reynolda” at 2 p.m. Dec. 3, 10 and 17 at 2250 Reynolda Road.

This tour of the historic house emphasizes the holiday traditions of the Reynolds and Babcock families, who lived there, through archival photographs and stories. Visitors will end their tour by learning about the holiday themes in “Leyendecker and the Golden Age of American Illustration,” now on display in the Babcock Gallery.

Tickets are $25, $20 for members, and must be bought in advance at www.reynoldahouse.org/holidays .

Holiday music with a jazz edge will include “Sleigh Ride,” “Santa Baby,” “The Christmas Song,” “You’re a Mean One Mr. Grinch,” “Have Yourself a Merry Little Christmas” and “Linus and Lucy.”

Tickets are $25, $8 for students and children at www. musiccarolina.org .

Swing into Christmas with Pops Chorus

The 36-voice mixed ensemble will present jazzed up holiday songs.

‘The First Rainbow Coalition’ to screen

Indie Lens Pop-Up, presented by ITVS, “Independent Lens,” and RiverRun will present a free screening of “The First Rainbow Coalition” at 6 p.m. Dec. 3 at the Forsyth County Central Library at 660 W. Fifth St., Winston-Salem. It will be followed by a discussion.

In 1969, the Chicago Black Panther Party began to form alliances across lines of race and ethnicity with other community-based movements in the city, including the Latinx Young Lords Organization and the southern Whites of the Young Patriots organization. The movement created a shift in Chicago politics and became an organizing model for future activists and politicians nationwide.

“The First Rainbow Coalition” will premiere nationally at 10 p.m. Jan. 27 on PBS.

Oaklawn Baptist Church will present David Phelps’ “It Must Be Christmas” tour at 7 p.m. Dec. 5 at 3500 Kernersville Road, Winston-Salem.

Phelps is a multi-Dove and Grammy Award-winning recording artist. Best known as the powerful tenor for the Gaither Vocal Band, Phelps has performed in venues worldwide, including the White House, New York’s Carnegie Hall and the Sydney Opera House in Australia.

Arts and crafts will be for sale

Twin City Artisans, a guild of local working artists who create throughout the year for this special event, will have a wide array of arts and crafts for sale.

Wake Forest University‘s Department of Jewish Studies will present Penny Sinanoglou’s “Partitioning Palestine: British Policymaking at the End of Empire” at 7 p.m. Dec. 3. Sinanoglou asks what drove and constrained British policymaking around partition, and why partition was simultaneously so appealing to British policymakers yet ultimately proved so difficult for them to enact.

Winston-Salem Writers will present a “Flying South” book launch at 7 p.m. Dec. 6. Three of the contributors — Janet Joyner, Donna Love Wallace and Patricia J. Slaga — will read their poetry and sign copies of “Flying South,” where their work appears. Winston-Salem Writers is a nonprofit organization that works to help writers interact with other writers and improve their craft. The book is $12.

Following a long tradition of December holiday exhibitions, Artworks Gallery members are exhibiting work in a variety of mediums and techniques with the common theme of “Home.” A portion of sales during the month will be donated to greeNest, a program that provides household furnishings to individuals and families transitioning to sustainable housing.

In addition, Artworks Gallery members have individually hand-glazed a collection of original ArtPlates available for purchase as a fundraiser for both greeNest and Artworks Gallery.

Admission is free. For information about greeNest, visit www.greenestws.org/. Artworks is at www.Artworks-Gallery.org and 336-723-5890.

Studio 7 will present a “Willy Nilly Christmas.” Willy Nilly artist, Deborah Willard will be displaying her painted clothing and hats throughout December at 204 W. Sixth St.

Willard will be leaving Studio 7 on Dec. 31, so she is celebrating with sales on all of her merchandise.

‘Deck the Halls’ at Sawtooth

The festive preview party will be 6-9 p.m. Dec. 6, and includes live music, drinks and light appetizers. Tickets are at $25 on Eventbrite, $30 at the door.

Brooks will address critical community questions related to what he calls the “age of fragmentation and division,” including how to build trust where there is distrust; and how to connect and offer care across race and other differences.

He is an op-ed columnist for The New York Times, and a commentator on the PBS’s Newshour.

Pre-signed copies of Brooks’ most recent book, “The Second Mountain,” will be for sale before and after the keynote, courtesy of Bookmarks.

Admission is free, but reservations are required at www. wsfoundation.org/davidbrooks .

Tuba Christmas concerts are held in more than 300 cities throughout the U.S. to celebrate those who enjoy, play, teach and compose music for instruments in the tuba family. Harvey Phillips created this annual event to honor the tubist William J. Bell, who was born on Christmas Day, 1902.

Lucky Pocket will play live music, and DJ HEK YEH will perform between sets. Bob Campbell will be the emcee. There will be complimentary beer, wine, soft drinks and light hors d’oeuvres, and a cash bar.

A new VIP lounge in the Speakeasy and Jazz Club of the Millennium Center will feature a private bar and the local band Anamika.

Tickets are $30 in advance at www.twincitysanta.com , $35 day of show, and a new, unwrapped toy donation for the Salvation Army.

Alongside traditional carols of the season, there will be music by composers/arrangers Eric Whitacre, Dan Forrest, Pentatonix and others, including “Winter Songs” by Ola Gjeilo.

Admission is free, and donations will be accepted.

‘A Jazzy Christmas’ at the Ramkat

Post Entertainment will present Chelsey Green and the Green Project in “A Jazzy Christmas” at 8 p.m. Dec. 7 at the Ramkat, 170 W. Ninth St., Winston-Salem.

Green was born into a family of jazz and funk musicians and started her performance career at age 5. She has a Doctor of Musical Arts degree from the University of Maryland College Park and is an associate Professor in the String Department at the Berklee College of Music in Boston.

The Green Project defies stereotypes of the violin and viola by fusing traditional classical technique with popular favorites and original songs in genres including R&B, pop, soul, funk, fazz, alternative, hip-hop and gospel.

Tickets start at $35 at www.theramkat.com.

Admission is free. For a schedule of other Christmas events in Danbury on Dec. 8, visit www. sc.hs.org.

William Southerland, artistic director for choral music, aims to blend traditional holiday numbers with those not normally tied with the holiday season.

“The Nutcracker,” performed by the New York Ballet for Young Audiences, will be at 3:30 p.m. Dec. 8 at the Andy Griffith Playhouse, 218 Rockford St., Mount Airy.

To have your event included in Sunday Arts, send information in the body of an email to relisheditor@wsjournal.com 10 days before publication. Tell us who is doing what when (time and date) and where (street address), and cost. Give a brief description of your event and a phone number and website, if pertinent.