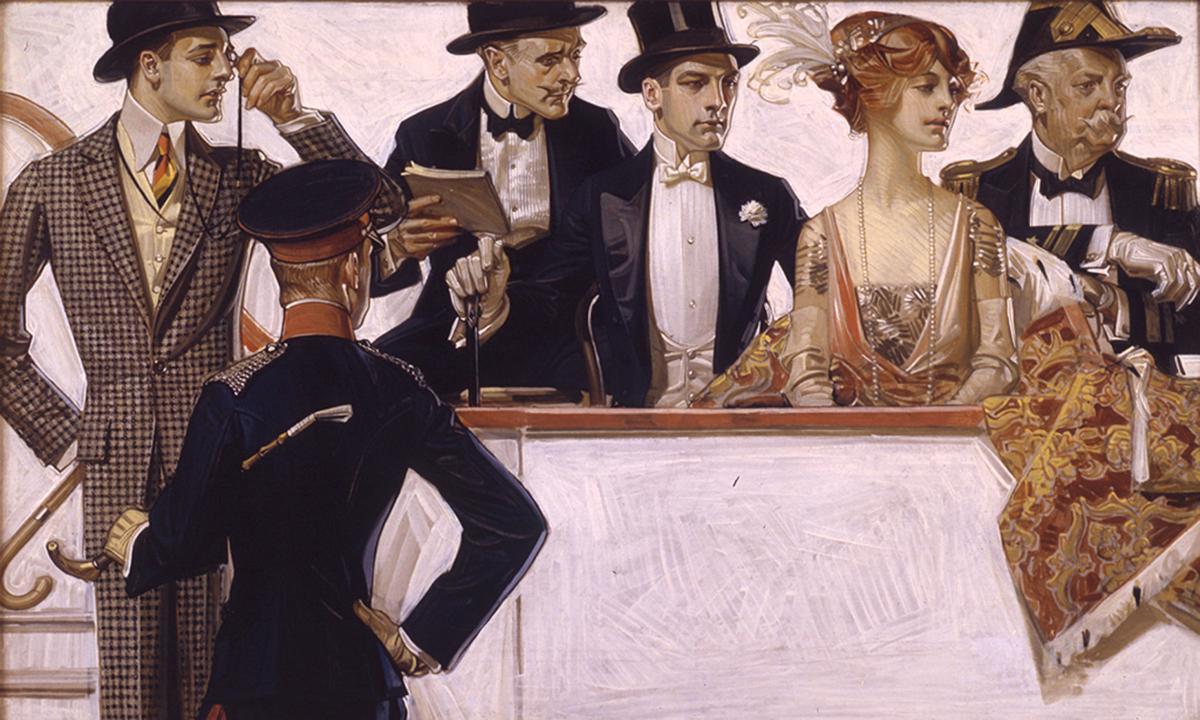 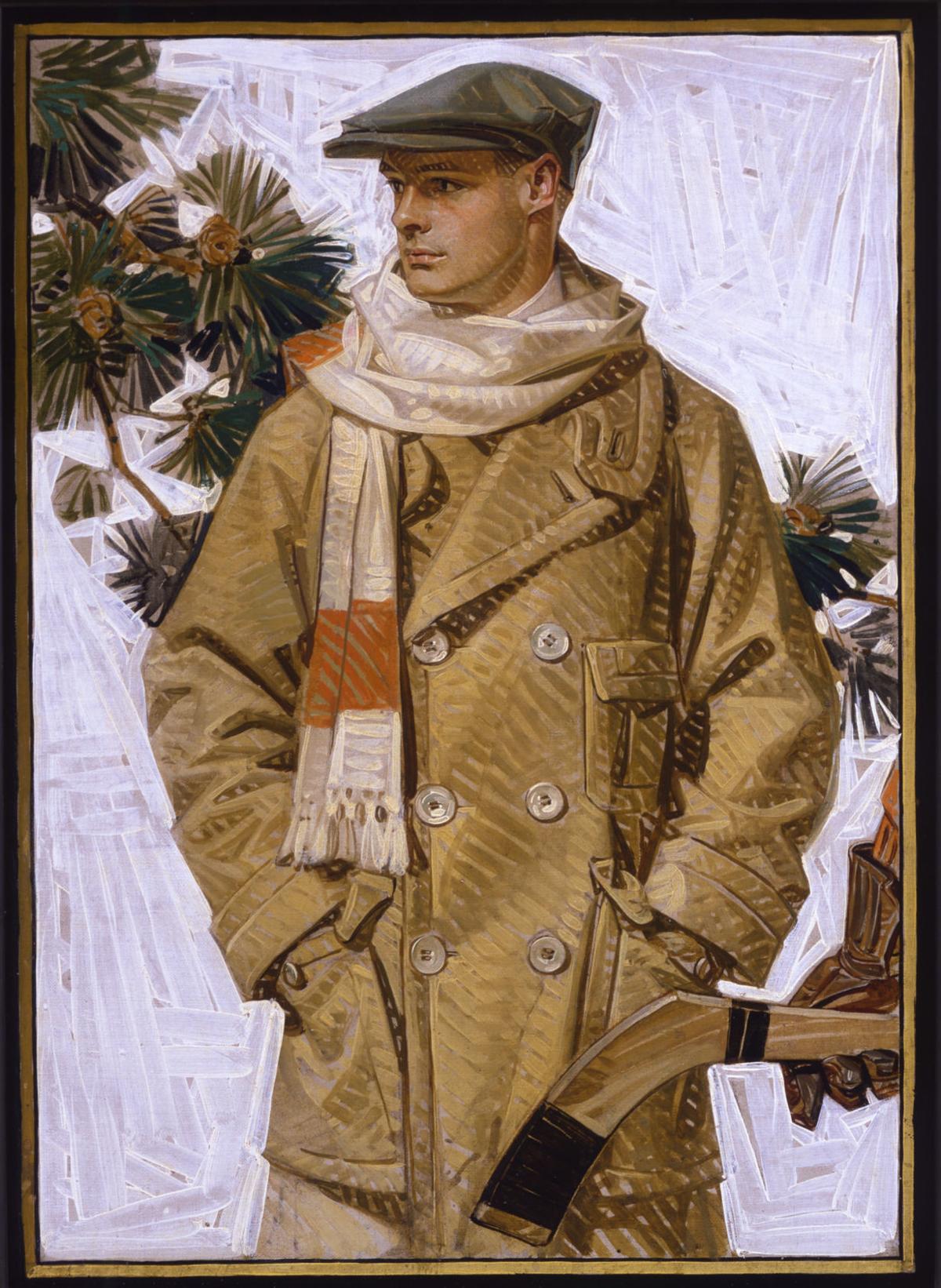 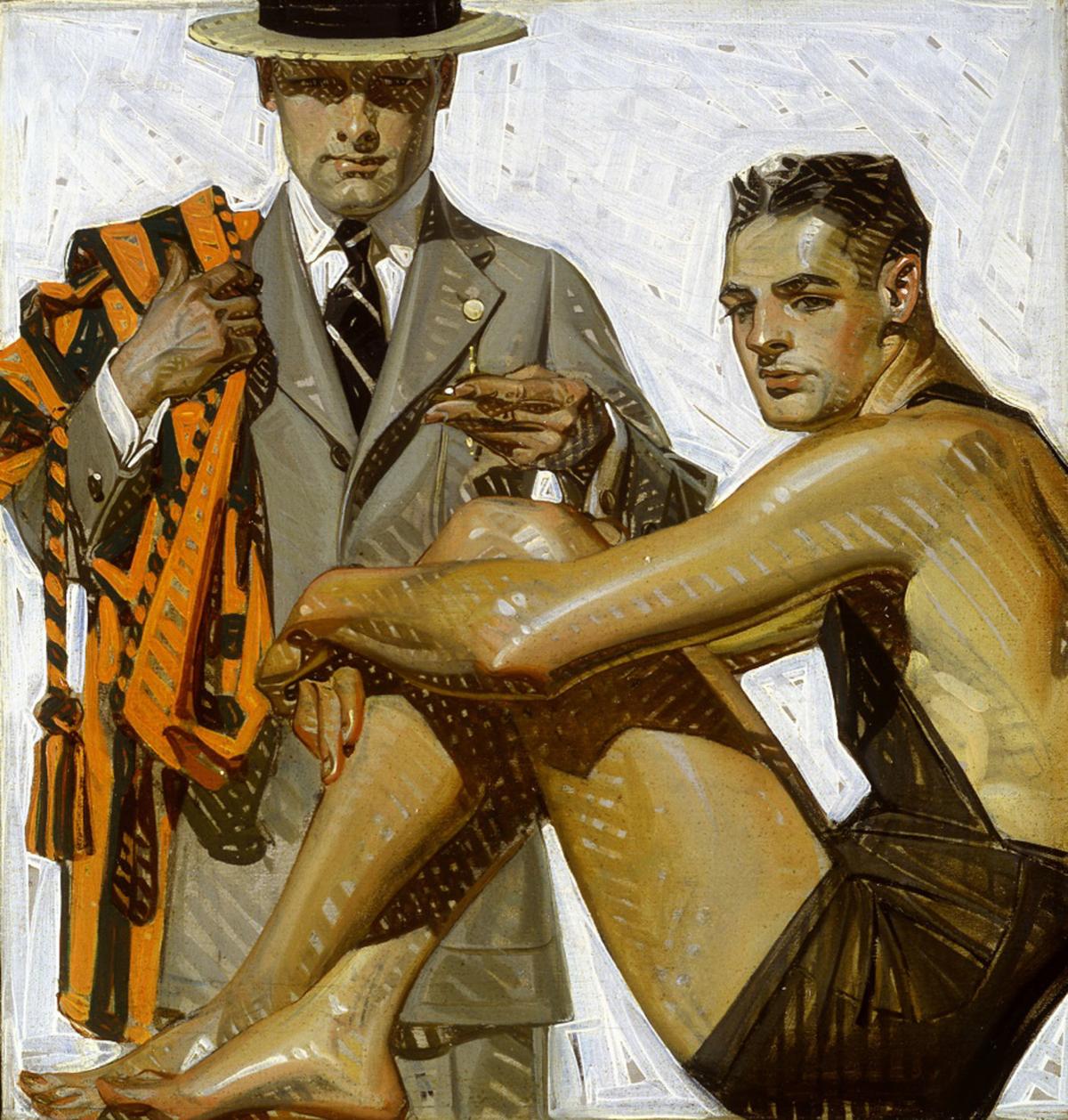 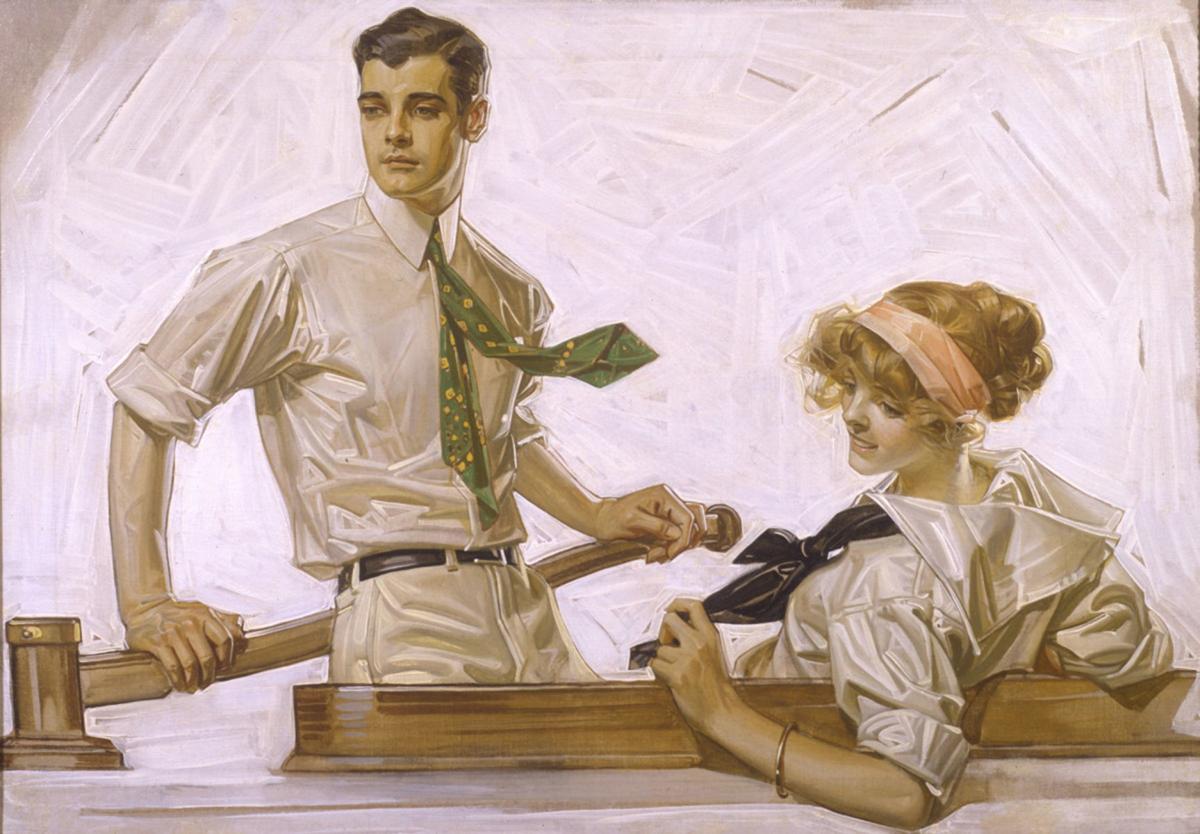 “Couple in a Boat,” image from “Leyendecker and the Golden Age of American Illustration” at Reynolda House Museum of American Art. 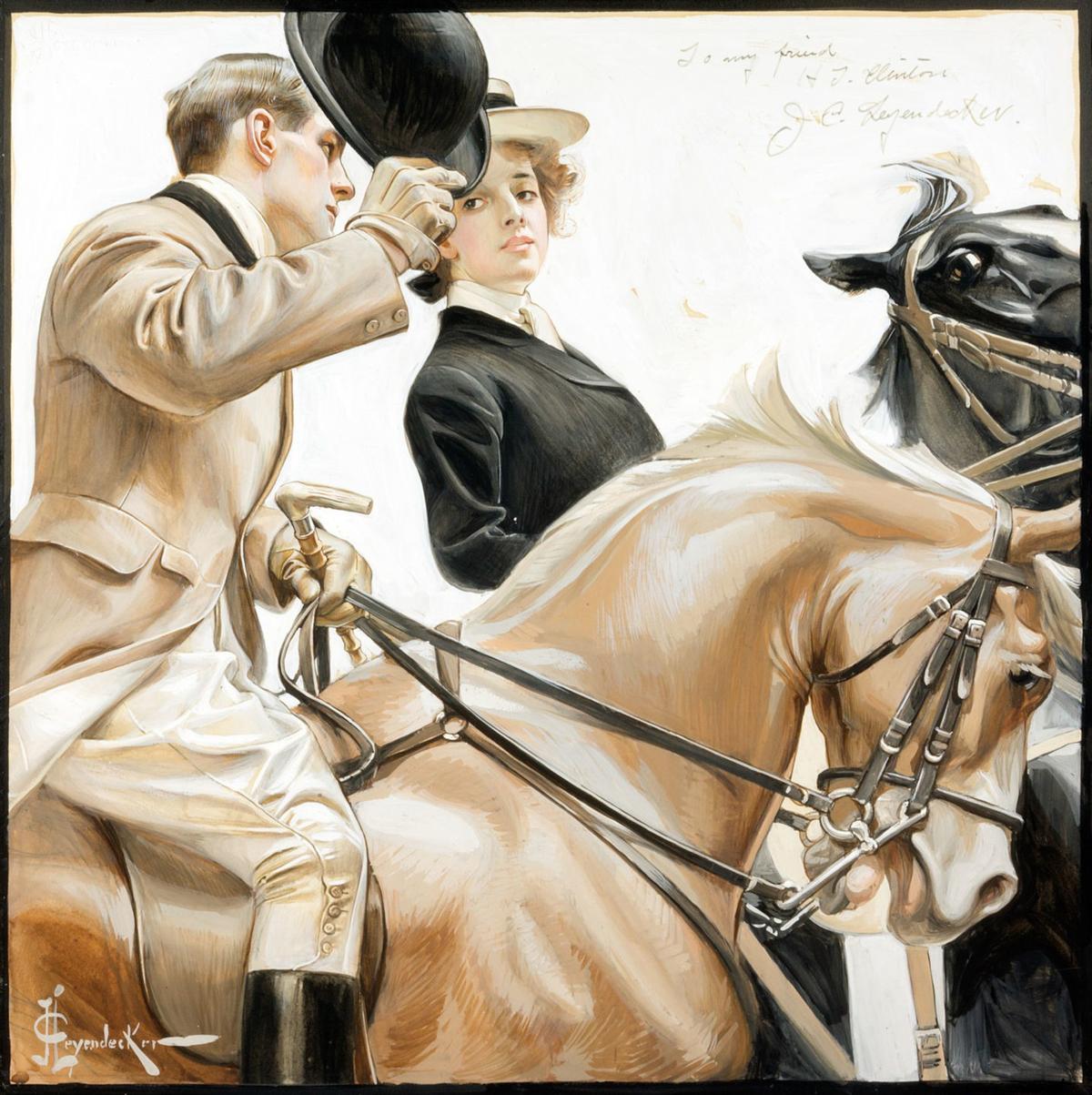 “Couple in a Boat,” image from “Leyendecker and the Golden Age of American Illustration” at Reynolda House Museum of American Art.

He may not be a household name, but without J.C. Leyendecker, images of the New Year Baby, Santa Claus and flowers on Mother’s Day would not exist as we know them.

As the premier cover illustrator for the Post for most of the first half of the 20th century, Leyendecker’s work both reflected and inspired visual aspects of that era’s culture in America. The mainstream image of Santa Claus as a jolly fat man in a red fur-trimmed coat was popularized by Leyendecker, as was the image of the New Year Baby.

The tradition of giving flowers as a gift on Mother’s Day was started by Leyendecker’s May 30, 1914, Post cover showing a young bellhop carrying hyacinths. It was created as a commemoration of President Woodrow Wilson’s declaration of Mother’s Day as an official holiday that year.

A prolific and sought-after artist and illustrator, Leyendecker (1894–1951) captured the public imagination with striking images of handsome men and glamorous women. This will be the museum’s first exhibition focused on illustration and its first to explore the work of an openly gay artist.

“I see storytelling as the great skill of Leyendecker,” said Philip Archer, deputy director at Reynolda House. “He told stories on a small cover, like the Saturday Evening Post, or on a passing bus. It was an idealization of how Americans saw themselves.

“He stands out because he creates art that’s funny, elegant and relatable. Even in advertisements, which depict idealized views of American beauty, they have the flavor of real life. People could see themselves wearing those products.”

“The detachable collar is a bi-product of the industrial and business revolutions,” Archer said. “The very notion of the white-collar worker derives from men adding collars to collarless shirts. The shirt can remain in use, but the collars can be detached to be laundered.”

Leyendecker suggested to the Arrow company that instead of showing a collar in their advertising, they should show the ideal American man wearing the collar.

“It’s a very early idea of branding,” Archer said. “That company got a 90% market share. Even when replaceable collars went out of style with the advent of more easily washable fabrics, the Arrow shirt continued to be an industry leader with Leyendecker painting ads into the ’20s and ’30s.”

That product was so ubiquitous that it even showed up in an Irving Berlin song: “You’re the top; you’re an Arrow collar.”

“The Arrow Collar Man becomes an image in F. Scott Fitzgerald’s fiction,” Archer said. “Leyendecker’s extravagant parties influenced the idea of the Great Gatsby, and he himself was mysterious and reclusive.”

At one point the Arrow Collar Man received more fan mail than Rudolph Valentino, the silent movie idol, and no one knew that he was based on Leyendecker’s romantic partner for 49 years.

Leyendecker influenced and was eventually eclipsed by a more familiar name, Norman Rockwell.

“I began working for The Saturday Evening Post in 1916, and Leyendecker was my god,” Rockwell said in a 1997 article in the Springfield (Mass.) Republican. “I actually used to, unbeknownst to him, follow him down the streets of New Rochelle, just to be close to him.”

“Rockwell re-purposed many of Leyendecker’s paintings,” Archer said. “That gently humorous, all-American look that we think of as Rockwell, people will be amazed at how much of that is in Leyendecker’s work.

“They remained friends for decades. Leyendecker did 322 covers for the Saturday Evening Post. When Rockwell got to 321, he stopped to let Leyendecker’s record stand.”

Later in life, Rockwell became increasingly critical of Leyendecker, possibly reacting to his idol’s reclusiveness and his openly gay life.

“It’s an example of the anxiety of influence,” Archer said. “For an artist or a painter, the artist has to take the hero off the horse.

“But Leyendecker is enjoying a revival now.”

A star is born

Born in 1874 in Montabaur, Germany, Leyendecker immigrated to Chicago in 1882 with his parents and three siblings. He and his youngest brother, F.X., studied at the Art Institute of Chicago before moving to Paris where they developed their distinctive styles.

Upon returning to the United States, the brothers entered a publishing renaissance and soon found themselves at its center, New York City. In 1914, they moved into a 14-room house in New Rochelle, N.Y., along with Charles Beach, where they lived together for 48 years.

“Leyendecker ... has been presented in that context — as a commercial illustrator with a broad public appeal,” Archer said. “With this exhibition, he will take his rightful place in the long tradition of brilliant artists who have portrayed Americans the way they would like to appear. Jaunty, urbane and impeccably dressed...”

By 1950, Leyendecker had illustrated more than 400 magazine covers. His easily identifiable style — “The Leyendecker Look” — helped shape the image of a nation. Leyendecker was talented at self-promotion, and his approach to his career influenced a generation of younger artists, including Rockwell, who said, “There wasn’t an illustrator in the country who could draw better.”

The exhibition has particular visual and cultural relevance to the early decades of Reynolda, an era of ball gowns and flapper dresses, tailcoats and tennis whites.

“It’s hard to think of an artist that better reflects that era,” Archer said. “We’ll be looking at cultural moments that reflect the early life of Reynolda House: Katharine as new woman, with a new, younger husband who was a debonair polo player. She doesn’t become a flapper, but she follows the fashion.

“We’ll be leading up to women’s suffrage in 2020. It’s pretty amazing that somebody as influential as Katharine couldn’t vote until the last few years of her life.”

“Leyendecker and the Golden Age of American Illustration” will coincide with a complementary exhibition at Reynolda, “A Self in the Remaking: Katharine Smith Reynolds Johnston,” on view in the historic house. It features historic costumes, photographs and manuscripts, many on display for the first time, pulled from the collections in the Reynolda House Archives and the Z. Smith Reynolds Library Special Collections and Archives, Wake Forest University.

Throughout the run of the exhibition, Reynolda will present lectures, a mini-symposium, and the Southern premiere of the play “In Love with the Arrow Collar Man.”

What: “Leyendecker and the Golden Age of American Illustration” will be presented in English and Spanish.