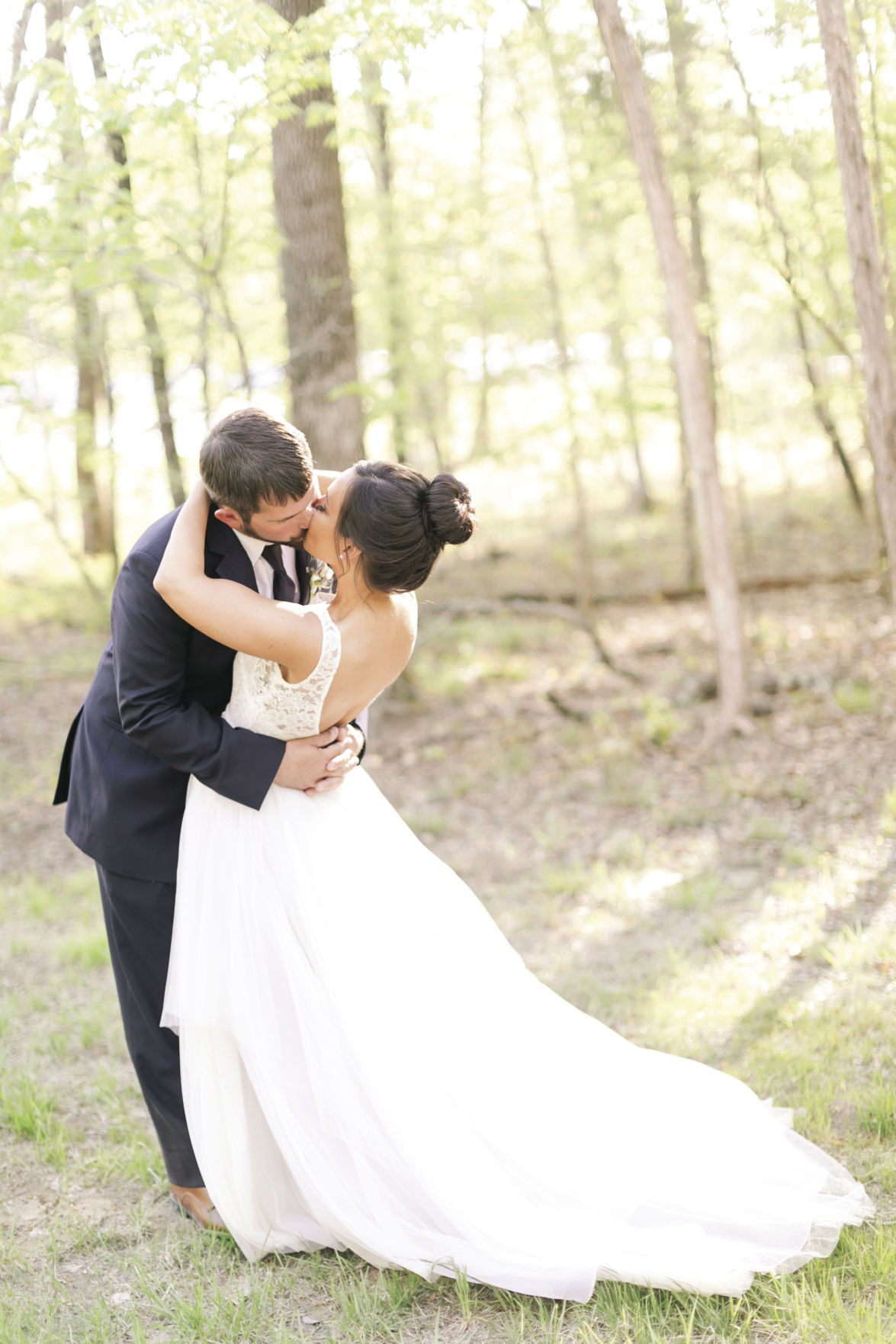 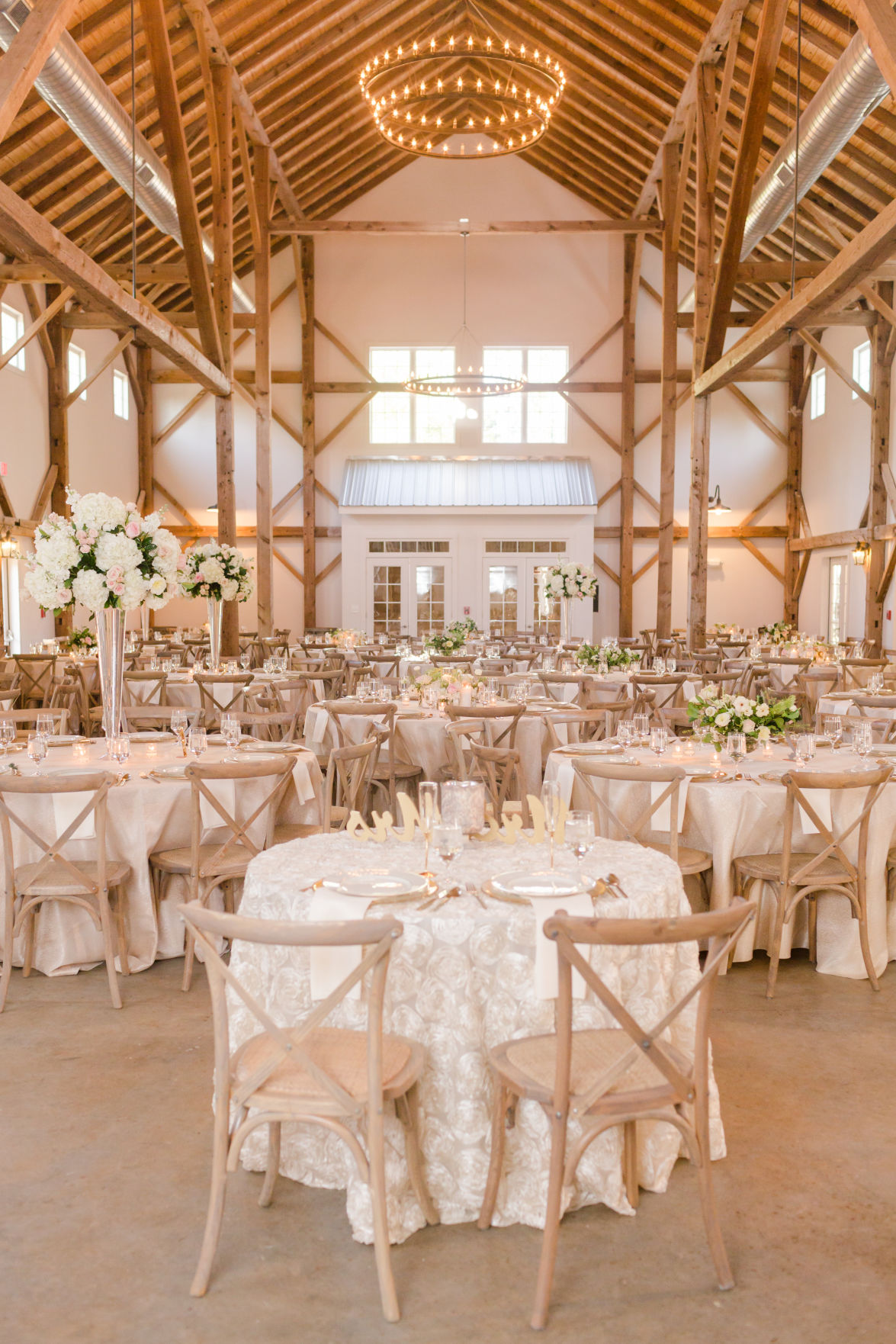 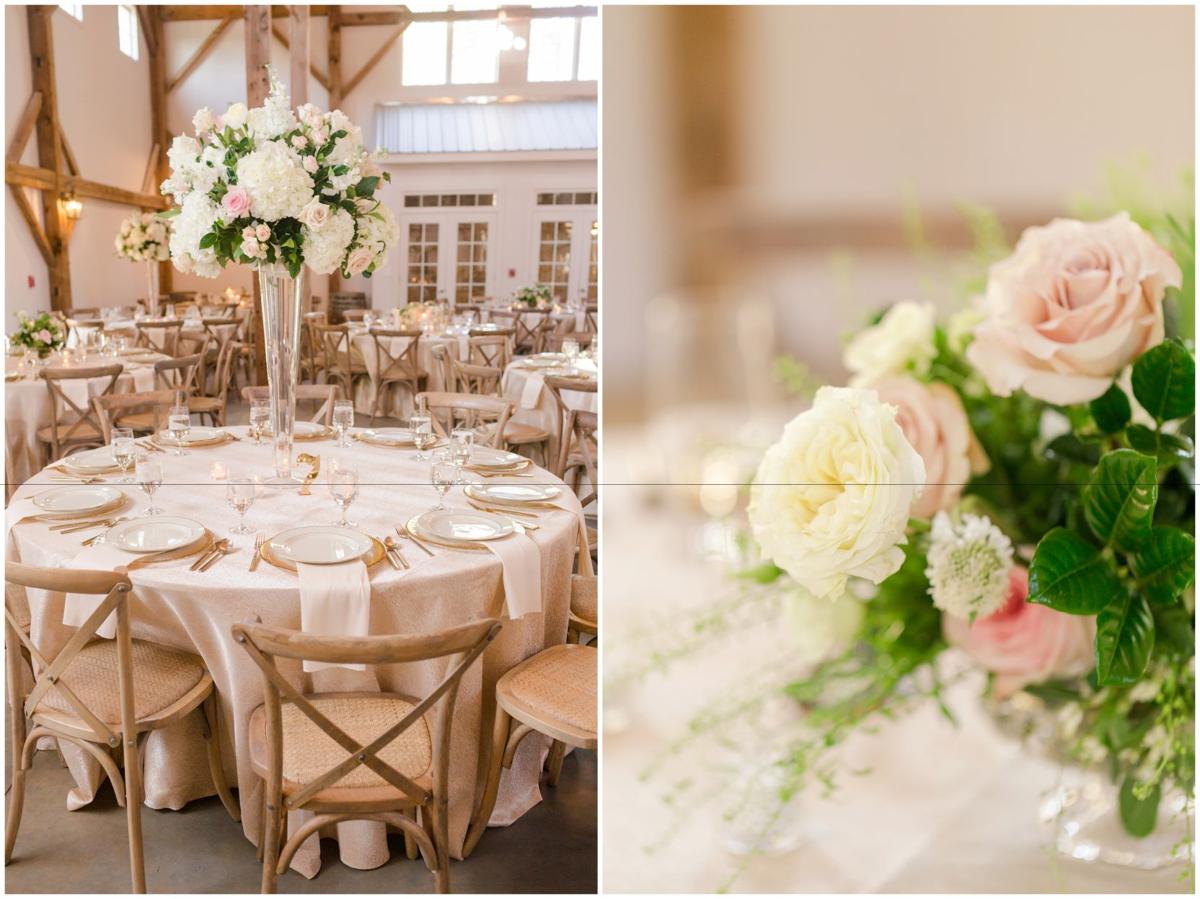 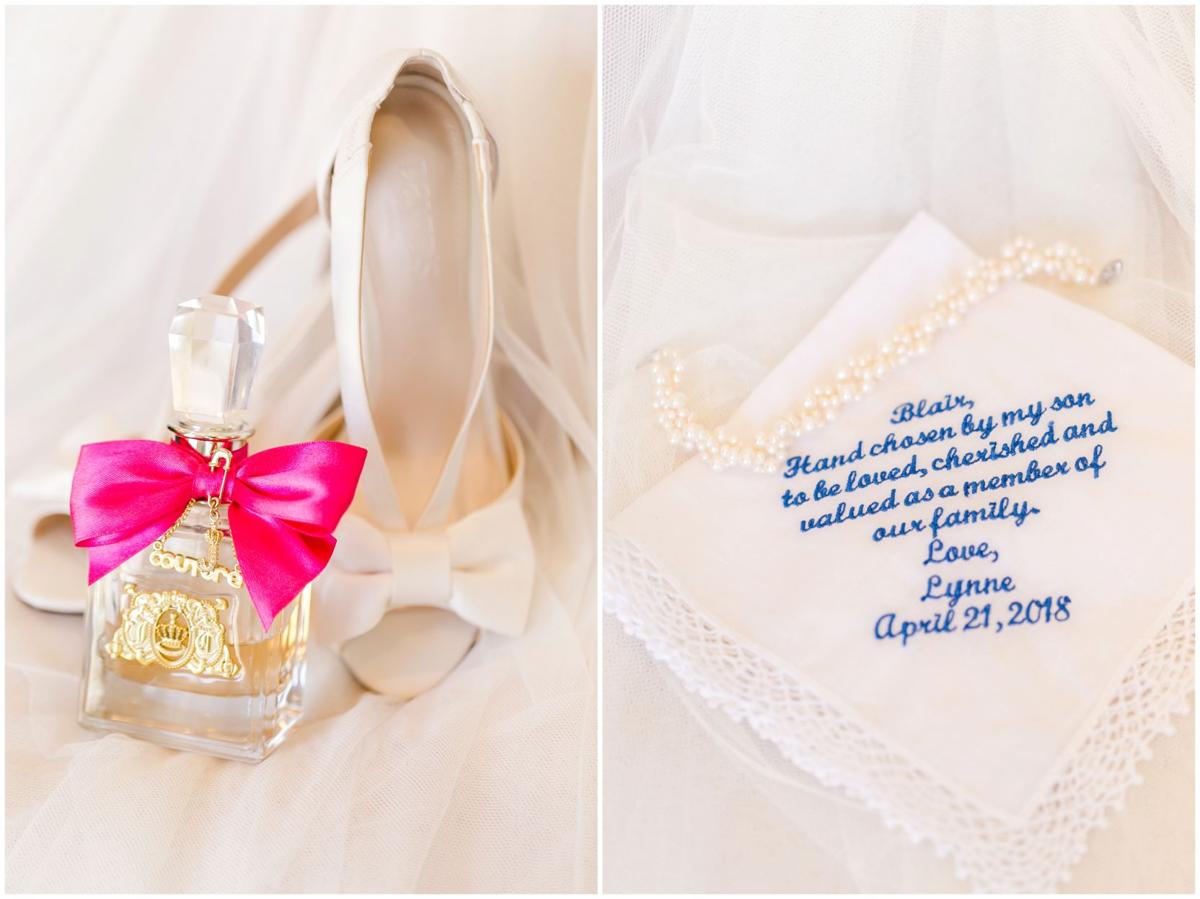 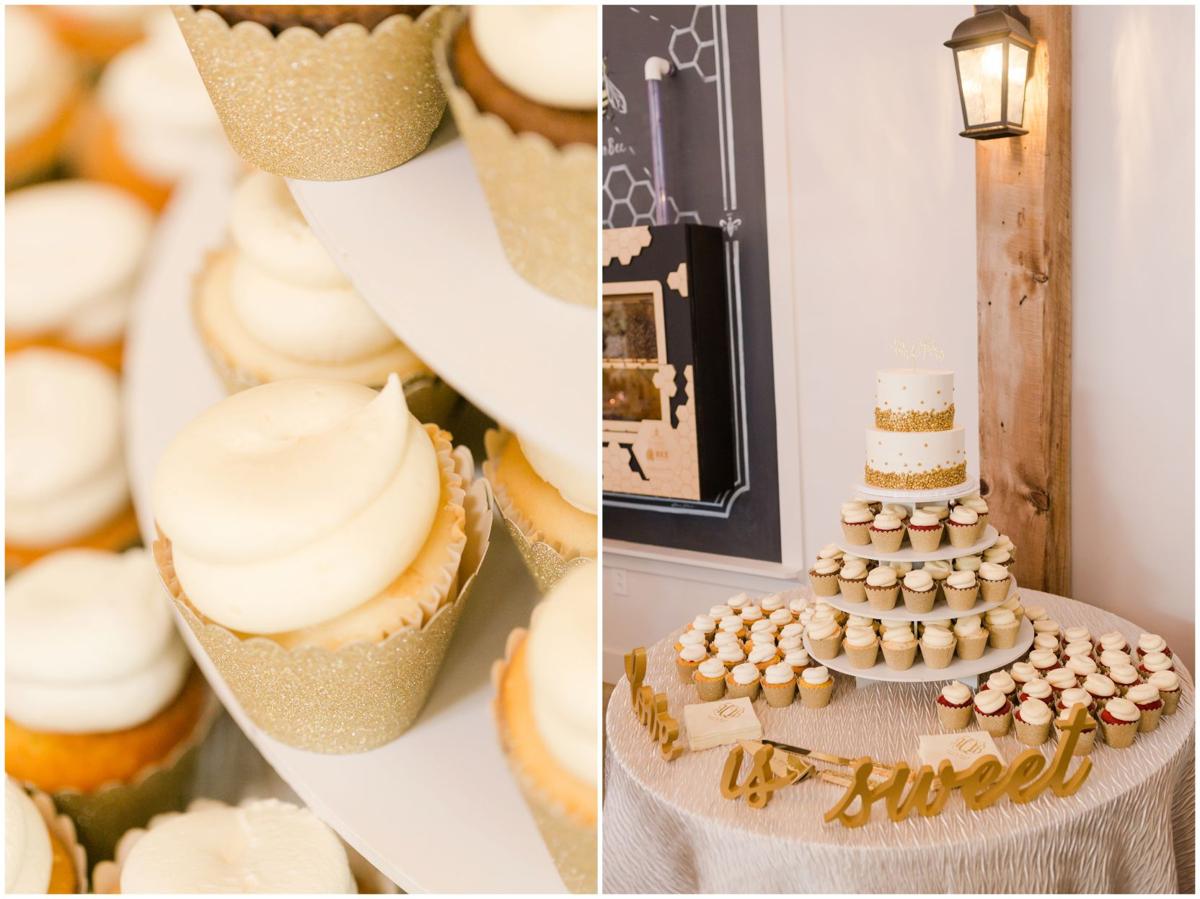 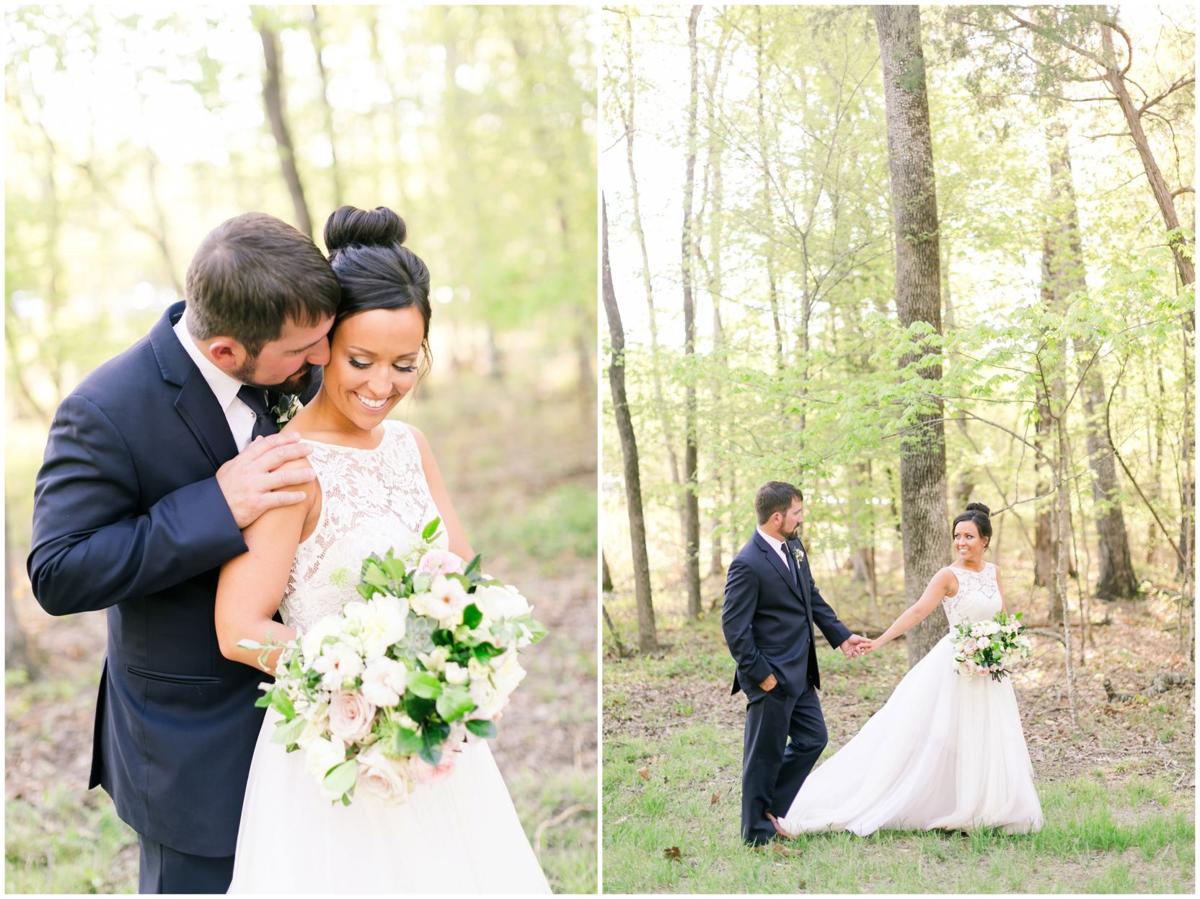 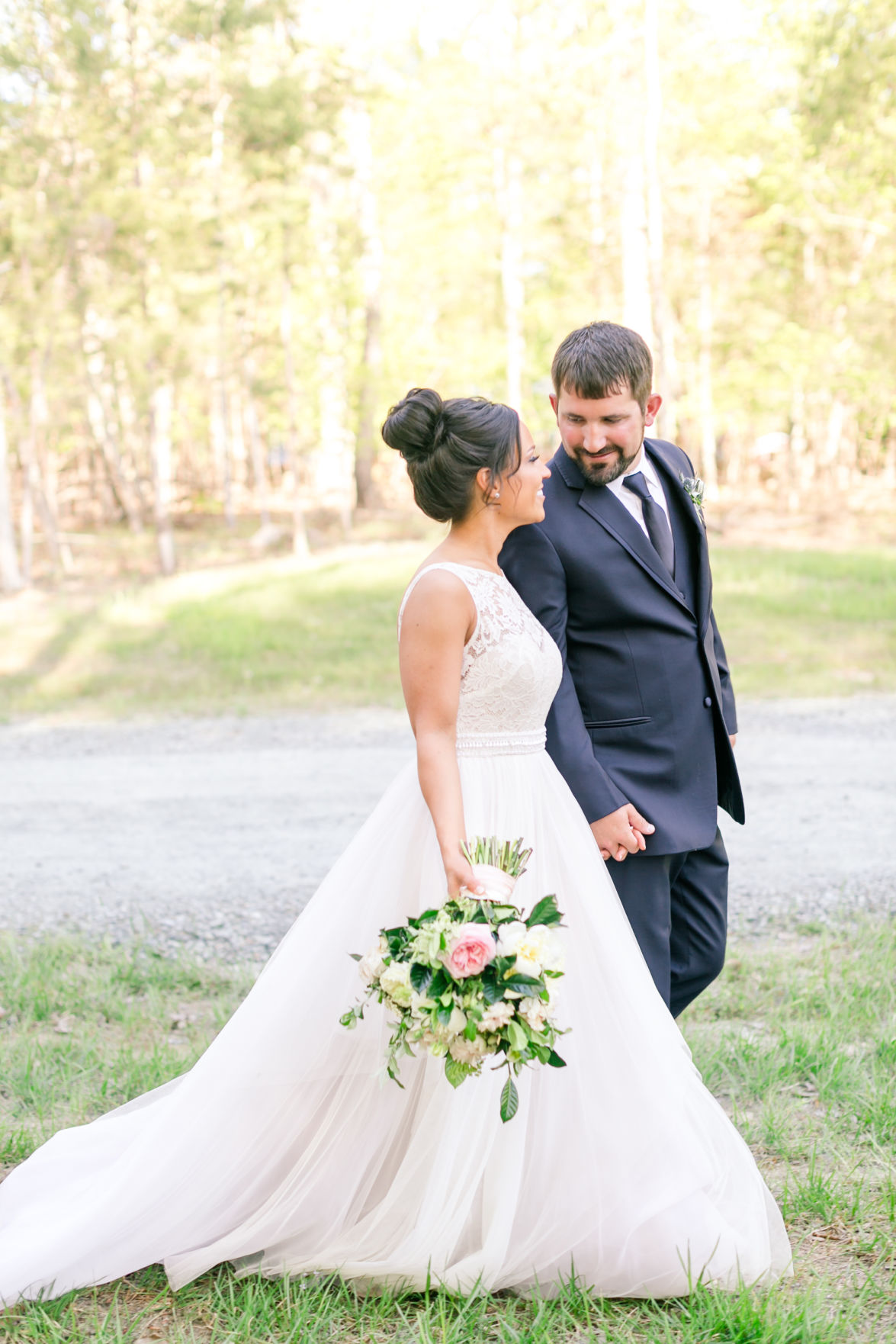 When Blair Kaleta married Alex Owen on April 21, 2018, it was the culmination of a classic romance between country boy and city girl. Blair is from Endwell, New York, near Binghamton. Alex is from Virginia Beach, Virginia. He is “all country,” Blair says, adding, “he wanted to wear cowboy boots for the wedding.” There is much more to their story, though, than opposites attracting.

Blair moved to the Raleigh area about five years ago to teach elementary school. She currently teaches at a year-round school. Alex is a physical education teacher at a middle school. Though the two had teaching in common, they didn’t meet through work, but through mutual friends.

The couple dated for a couple of years before getting engaged in September of 2017, on Blair’s birthday. Alex didn’t choose a fancy location to propose. True to his simple roots, he took Blair out to a local brew pub. The sophisticated city girl ordered a glass of wine. “I didn’t know they didn’t serve wine,” she says. Nonetheless, out came a glass with a diamond ring in it. The country boy was not unsophisticated; the engagement ring was by noted designer Neil Lane. Blair said yes, and an April wedding was planned.

Blair said the wedding would not have happened without approval from her young son. Mason turns 4 in October. She says that Mason and Alex have a close relationship and bonded from their first meeting, a date that included a shared grilled-cheese sandwich.

One of the first decisions was where to have the ceremony and reception. The couple had attended a wedding at The Barn in Chapel Hill and had enjoyed its laid-back ambiance and rural setting. The venue gave them a list of available dates, and the couple chose a date in April, giving them seven months to prepare.

Another decision was wedding attendants. Alex chose his two brothers as dual best men. Blair chose two friends as matrons of honor, “and it kept growing and growing,” until there were eight attendants on each side. Her brother Bryan was a groomsman.

With so many bridesmaids, Blair’s mind was on their dresses as much as her own wedding gown. She chose the bridesmaids’ dresses first, in a steel blue. She didn’t have a strict idea of what she wanted for her own wedding dress, she says. She shopped for dresses with several friends at many bridal boutiques, with no luck. By chance, the group stopped at Alexia’s in Raleigh. “I didn’t know I needed to make an appointment first, but they welcomed me anyway, and I found exactly what I wanted.” Her dress is a simple, elegant silhouette featuring a lace bodice and sleeves and a deep, open back. The groomsmen chose to wear suits rather than formalwear, but no cowboy boots.

Another special aspect of the wedding was Blair’s escort down the aisle. Both her father and grandfather are deceased. An uncle on her mother’s side walked her down the aisle. Blair said her relationship with her grandfather was especially close, and a burlap aisle runner was printed with a tribute to him.

The wedding was at 4 p.m., outside The Barn, in the garden area. The reception began with a cocktail hour, followed by dinner and dancing until 10 p.m. Blair says that she and Alex worked to find a happy medium between city and country. For example, barbecue was served, but reception decorations had elegant gold trimmings.

They chose to have a small wedding cake, with cupcakes in several flavors for guests. The couple didn’t exchange vows during their service, but instead wrote vows to each other in separate booklets, which each of them read privately before the ceremony. “We had the videographer record each of us reading the vows the other had written, so we could watch it later. It was very meaningful,” Blair says.

Alex’s wedding band may not look unusual at a glance, but it reflects his love of hunting and his country roots. The ring is made from elk antler and recovered barn wood.

The couple’s first dance at the reception was “Love Your Love the Most” by Eric Church. “Our DJ was the best,” Blair says. “He even let us DJ for a while.”

After the festivities, guests and the newly married couple spent the night in rooms at the Carolina Inn in Chapel Hill. “We used shuttle buses, which was very convenient, because The Barn is kind of far out.” The couple delayed their honeymoon for a month, then enjoyed a Caribbean vacation at the Veranda in Antigua (verandahresortandspa.com), which was Blair’s first trip outside of the United States.

Though she admits to be a compulsive perfectionist, Blair says that she and Alex couldn’t be happier with how their wedding and reception turned out. “Everything was seriously perfect, including the weather.”

Alex and Blair Owen live in a ranch-style house on 6 acres just outside Raleigh. Blair says that even though she is still a city girl, she is very happy with married rural life, which includes three dogs, a garden and chickens.

Florist: Jennifer Wood at The Barn of Chapel Hill

Hair and Make Up: Courtney Hughes, The Makeup Team of NC