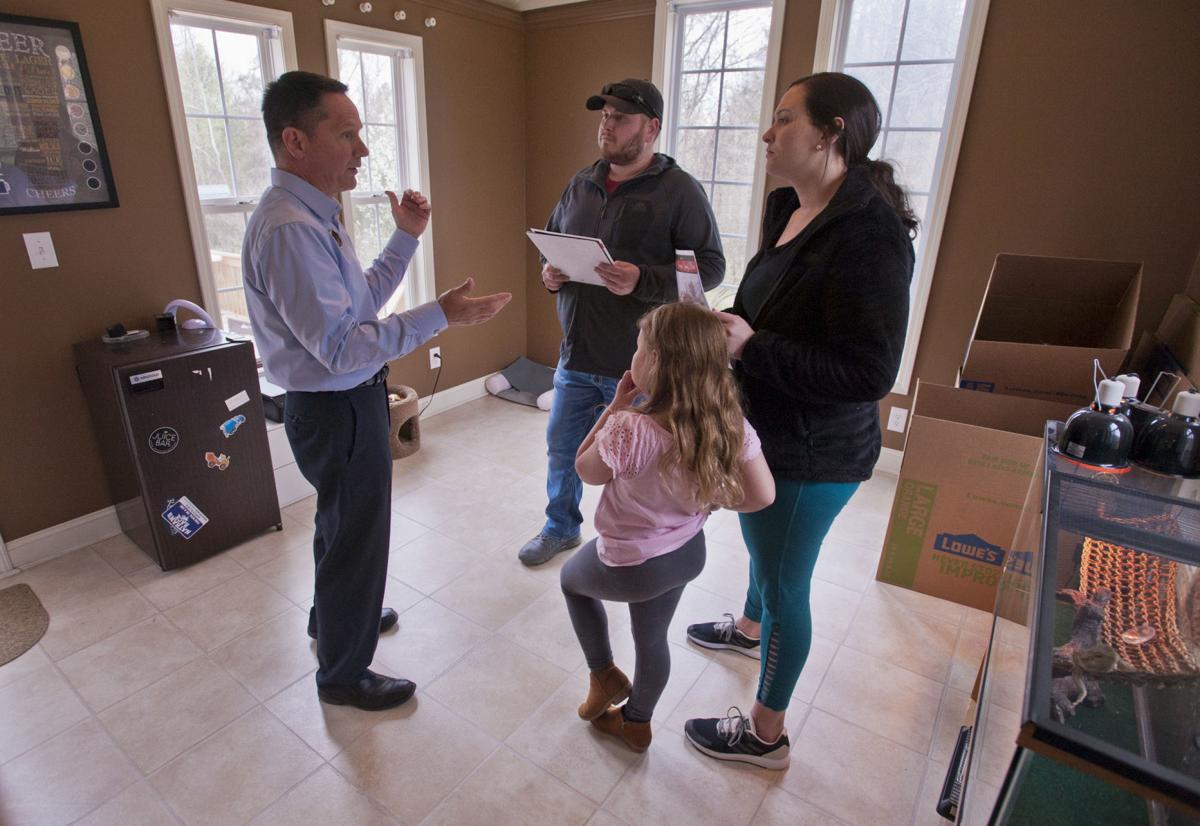 Real estate agent Jimmy O’Brien with Keller Williams realty (left) talks with Drew Krupp, fiancée Kristina Parrish and her daughter, Sophia Carey, as they tour a house at 1828 Harper Springs Drive in Clemmons during an open house March 15. Housing inventory is limited and interest rates are near record lows. 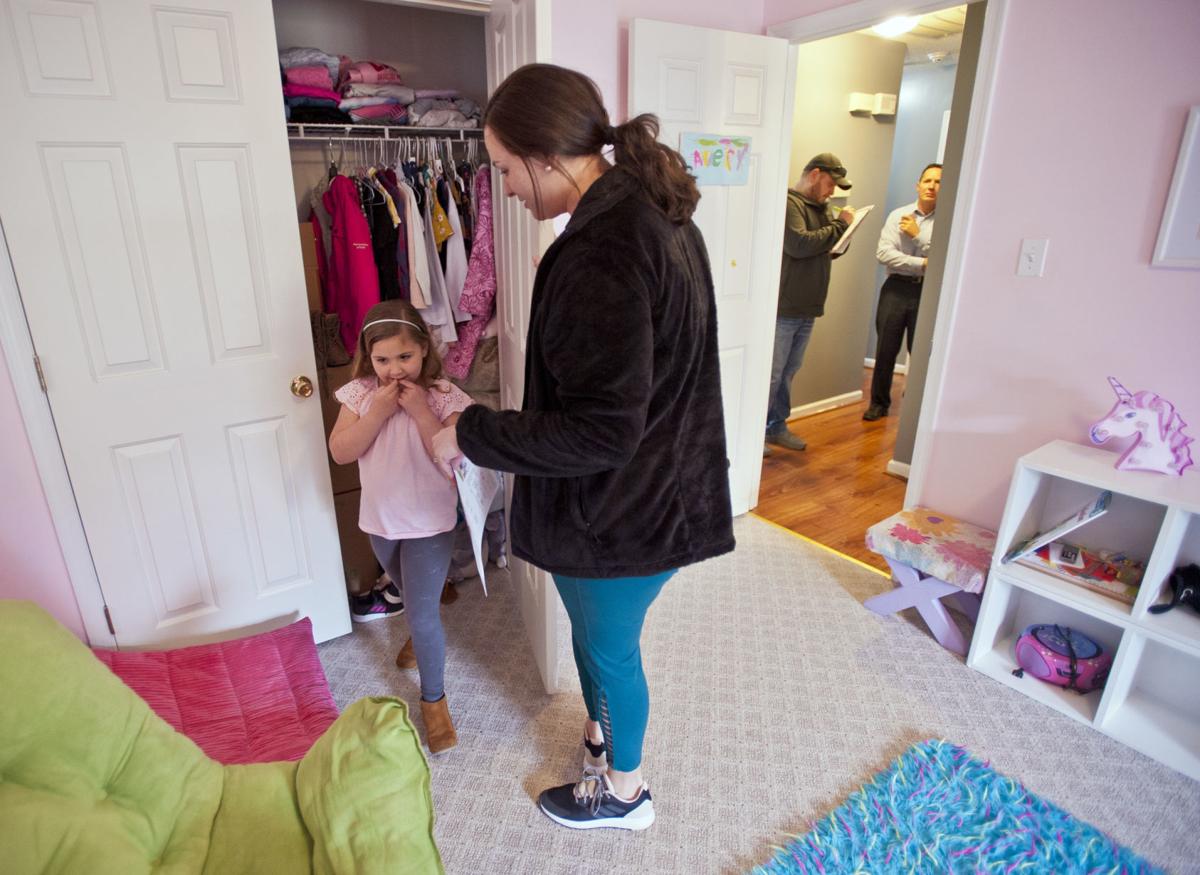 Kristina Parrish and her daughter, Sophia Carey, look at a bedroom and closet as fiancé Drew Krupp talks with real estate agent Jimmy O’Brien with Keller Williams realty as they tour a house at 1828 Harper Springs Drive in Clemmons during an open house Sunday. 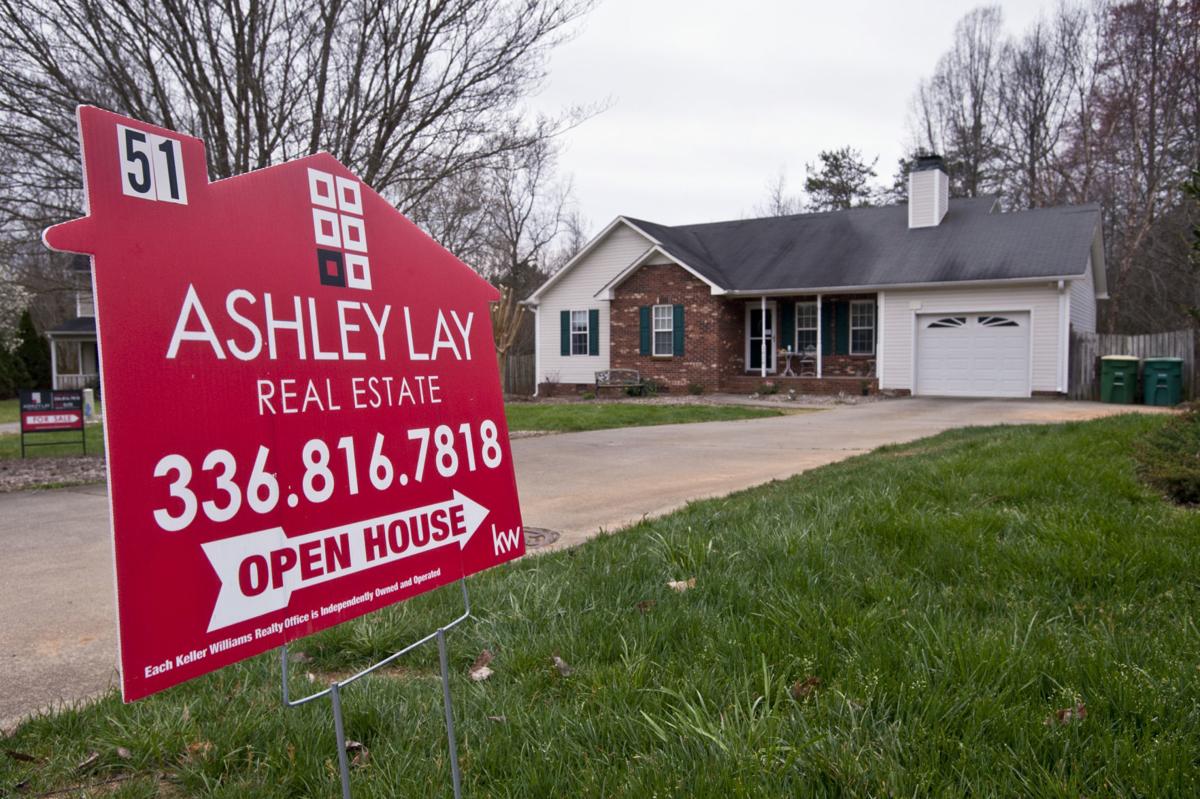 Keller Williams Realty was holding an open house at 1828 Harper Springs Drive in Clemmons on March 15. The new coronavirus — COVID-19 — may make for a more cautious, less competitive housing market. 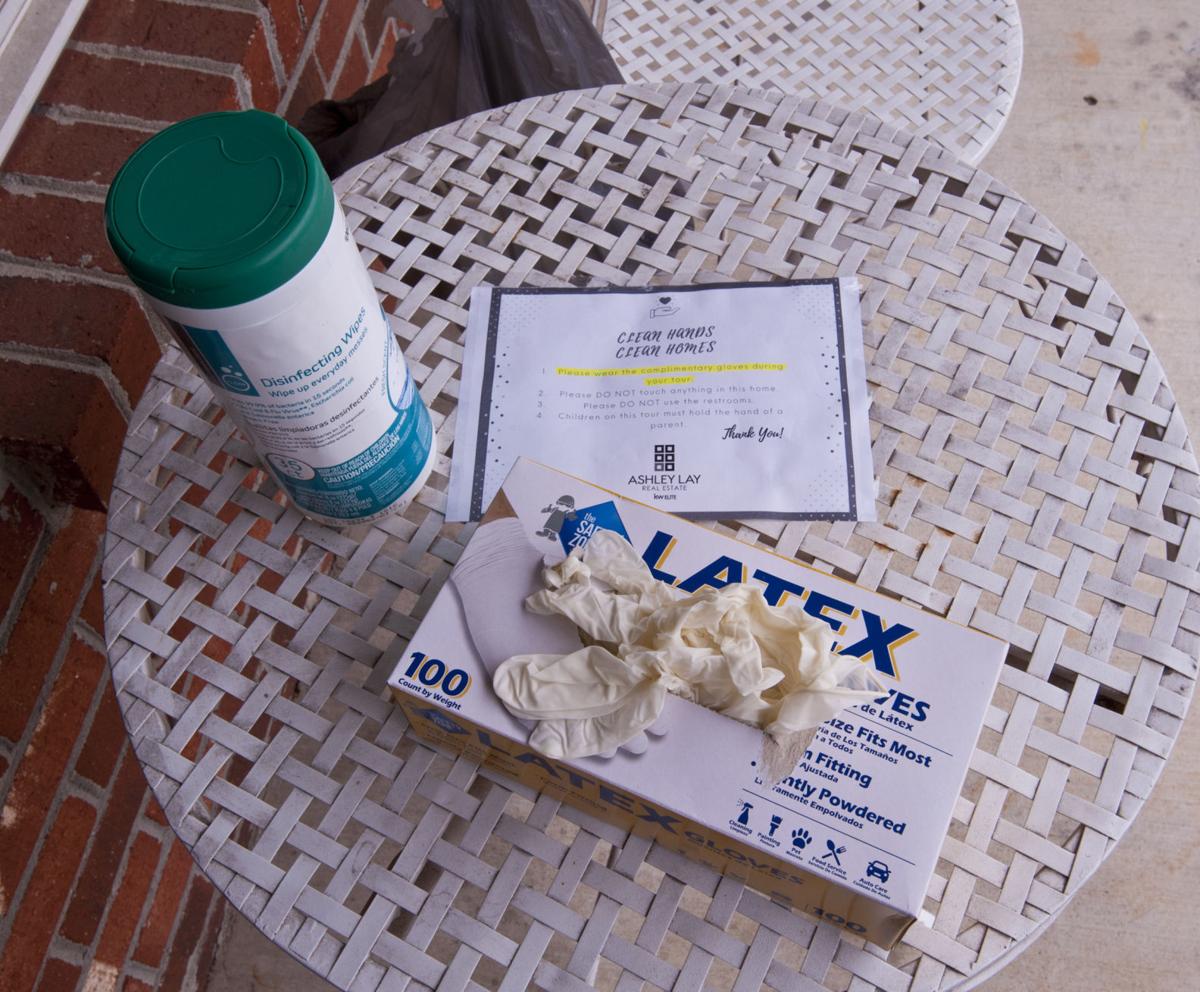 In response to coronavirus concerns, Keller Williams Realty was offering latex gloves and disinfecting wipes during an open house in Clemmons on March 15.

Real estate agent Jimmy O’Brien with Keller Williams realty (left) talks with Drew Krupp, fiancée Kristina Parrish and her daughter, Sophia Carey, as they tour a house at 1828 Harper Springs Drive in Clemmons during an open house March 15. Housing inventory is limited and interest rates are near record lows.

Kristina Parrish and her daughter, Sophia Carey, look at a bedroom and closet as fiancé Drew Krupp talks with real estate agent Jimmy O’Brien with Keller Williams realty as they tour a house at 1828 Harper Springs Drive in Clemmons during an open house Sunday.

Keller Williams Realty was holding an open house at 1828 Harper Springs Drive in Clemmons on March 15. The new coronavirus — COVID-19 — may make for a more cautious, less competitive housing market.

In response to coronavirus concerns, Keller Williams Realty was offering latex gloves and disinfecting wipes during an open house in Clemmons on March 15.

Open houses in the real-estate industry have fast become yet another casualty of the coronavirus.

Amid rampant concerns about being out in public, realtors and real-estate agents have been hopeful that near-record-low mortgage rates and a limited supply of new and existing homes for sale would continue to entice potential buyers and sellers.

However, the slate of open houses held March 14-15 may be the last for a while, going along with postponements and cancellations of other public gatherings of more than 10 people.

“We are discouraging our 80 independent agents from holding open houses and getting together in larger groups,” said Curtis Leonard, founding partner and co-owner of Leonard Ryden Burr LLC. It is the Triad’s largest independent real-estate firm.

“Our agents are independent, but right now, I wouldn’t hold (an open house).”

Leonard said some of the open houses held March 14-15 drew significant attendance, while others didn’t.

“We’re still seeing houses go under contract and we have had several new listings, so there remains interest in buying and selling homes,” Leonard said.

“We know there will be the annual rush of interest from medical students getting their medical resident appointments between now and summer.”

Keller Williams Elite Realty of the Triad said its ownership group has opted to halt open houses after last weekend’s showings “until further notice.” Its current plan is to continue to offer individuals showings, but that may change as well.

“We want to do our part to stem the spread of the coronavirus,” said Ashley Lay, owner of her namesake real-estate company.

Lay had conducted multiple open houses over the weekend in Forsyth County — just as she has in previous weekends.

“Because our agents are independent contractors, that will not be an edict, but a strong suggestion,” Lay said.

“It has been a discussion point among Realtors online.”

“Our association has taken steps, like our monthly board meeting will allow members to attend virtually, and we are exploring servicing our members via phone and email to limit in-person events until further guidance,” he said.

Those rates have dropped, just like gasoline prices, in part out of fear of less consumer demand for their product because of the virus that causes COVID-19.

LendingTree.com has reported a 308% year-over-year increase in mortgage refinancing applications in North Carolina, with Raleigh ranked second in the country at 406% and Charlotte seventh at 363%.

“But the virus does heighten some of the longer-term challenges on the supply side in terms of housing supply.”

Leonard said most of the buying interest currently is in the $300,000-and-under market involving individuals trying to make a renting or buying decision.

For individuals paying in the range of $1,500 a month to rent, it often makes sense to buy if they can afford what is commonly a 3% down payment and they have good credit, he said.

Lay said March 14 that the Keller Williams Elite Realty group “has a pretty robust database to measure housing activity that our sales team uses to reach out to potential sellers and buyers.”

“For example, there were 20 commentators Friday night on one open-house property, and only one person said they would hold off attending because of the coronavirus.

“We believe 10% to 20% of potential buyers will put off looking,” Lay said. “We plan to expand our use of virtual tours for not only those reluctant to go into public settings, but also for out-of-state buyers.”

She said potential sellers who opted to not hold an open house over the weekend were elderly in the high-risk category for exposure to coronavirus. “They preferred not to be exposed to risk at this time,” Lay said.

Before the shutting down of large public gatherings that began in the past week, Lay said all of her home listings were getting multiple offers.

“We, of course, respect the instruction from public health and elected officials, but there are ways we can still go about our jobs,” Lay said.

For example, during open houses, potential buyers in the same home are being asked to stay at least 6 feet from each other, or wait until one tour is over to begin theirs.

“We’re asking buyers to wear gloves, or we will have some if they don’t bring them,” Lay said. “We’re asking that they don’t touch things in the house, that they use Clorox wipes when touching door knobs, hold their children’s hands and not use bathrooms.

“It’s OK to show product. You just have to be safe about it.”

McPherson echoed Lay in saying “the concern about the coronavirus has maybe reduced a few buyers or made people decide against doing an open house.”

“But what it has done is allow those in the marketplace to have a little less competition and get the home of their dreams.”

McPherson stressed it remains “a great time to sell your home. Average price is up and more sales than last year.”

“Interest rates are the lowest I have seen in my almost 20 years in real estate. I have been listing homes and getting multiple offers quickly in the past few weeks.”

In December, Realtor.com ranked the combined Winston-Salem metro area of Forsyth, Davidson, Davie, Stokes and Yadkin counties as the nation’s eighth most attractive market for 2020 when projecting home-sale and home-price performance.

Attractive, in this instance, refers not only to potentially favorable housing markets for buyers and sellers, but also the balance of supply and demand.

“While the U.S. housing market is expected to cool in 2020, certain markets will remain steadfast, fueled by strong local economies, job creation and available inventory, especially at the entry-level price point,” Realtor.com said in its news release.

Realtor.com projects that Winston-Salem will have a 0.5% increase in home prices from a median home price of $169,000, as well as a 3.6% increase in sales. The sales include condos, lofts and other residential offerings that are growing locally, particularly downtown.

The Winston-Salem Realtors association has said that home sellers, on a median basis, are gaining 98.5% of their list price in Forsyth, as well as the median turnaround time from listing to sale being 10 days.

The recent uptick in home prices could continue to prevent some millennials from being able to afford a house, according to economists and housing analysts.

Home prices in the Winston-Salem area ended 2019 on a higher note, according to CoreLogic, a national real-estate research company.

Prices in the Winston-Salem area climbed 6.14% year over year in December, compared with being up 5.68% in November and 4.43% in October. CoreLogic does not disclose a median price.

For the second consecutive month, the Winston-Salem MSA had the highest increase in home prices in December among North Carolina’s five main metro areas.

“The millennial cohort has now entered the housing market in force and is already driving major changes in buying and selling pattern,” Martell said. “Almost half of the millennials over 30 years old have bought a house in the last three years.

“Perhaps most significantly, almost 80% of all millennials are confident they will become homeowners in the future.”

He said the coronavirus may lead to a slowdown in construction of new homes, along with shrinking availability of existing housing stock.

Tony Plath, a retired finance professor at UNC Charlotte, is less optimistic in the short term because “we’ve never seen anything like the public reaction we’re seeing today to a pandemic virus.”

“Since we just don’t know the trajectory of this thing — are we going to look like Italy in three weeks?

“More importantly, when we don’t know how irrationally the public will react to the threat of viral contagion, it’s quite impossible to say how home buyers and homeowners are likely to react,” Plath said.

Plath said he’s hopeful that federal stimulus packages that include public-health spending will help boost confidence in the U.S. economy and play a role in flattening the increase in infection cases.

If confidence in the U.S. economy is bolstered and the coronavirus outbreak is contained in a few weeks or months, Plath said there could be a record level of mortgage refinancing before rates go back up.

The online housing research group Curbed.com said “the wild card in the housing market is coronavirus.”

“If its impact is prolonged and induces even a minor recession, it could put a damper on demand — which would actually be welcome for buyers in particularly competitive markets.

“Still, don’t expect home prices to drop. It would likely just slow down the pace at which they are rising.”