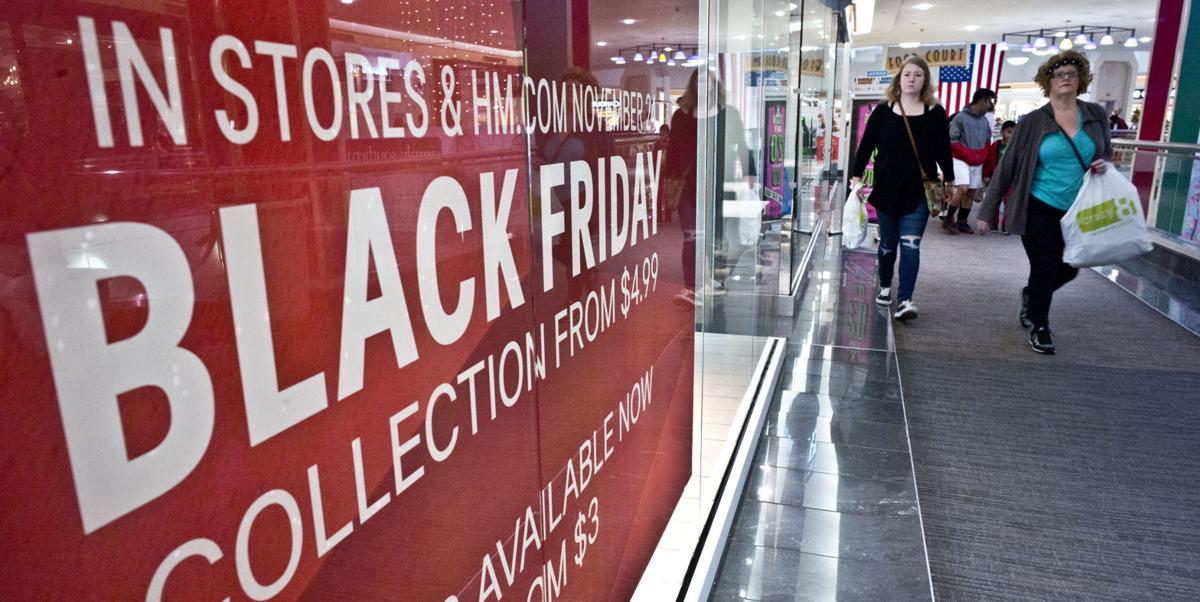 With this year's shorter holiday season, some retailers rolled out deals the day after Halloween. 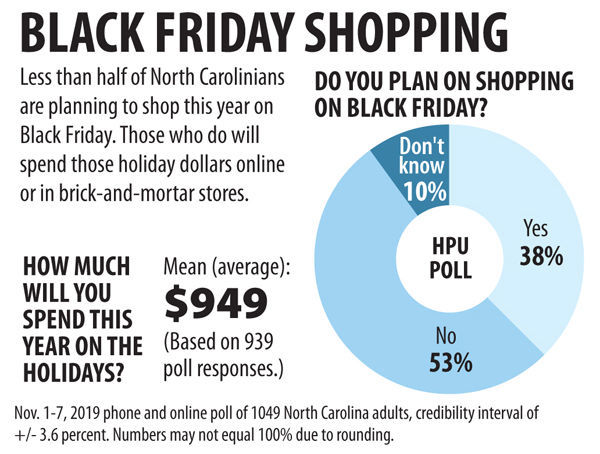 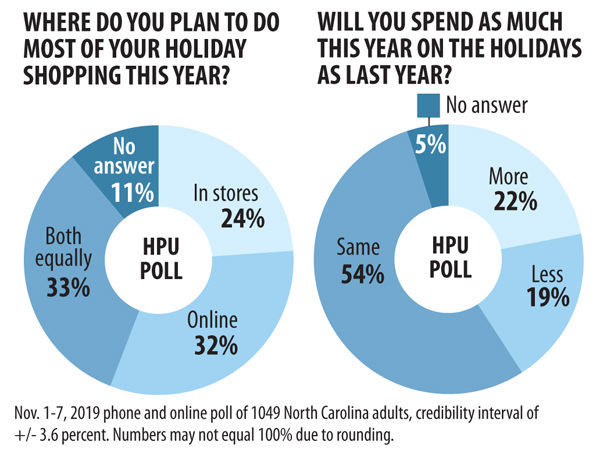 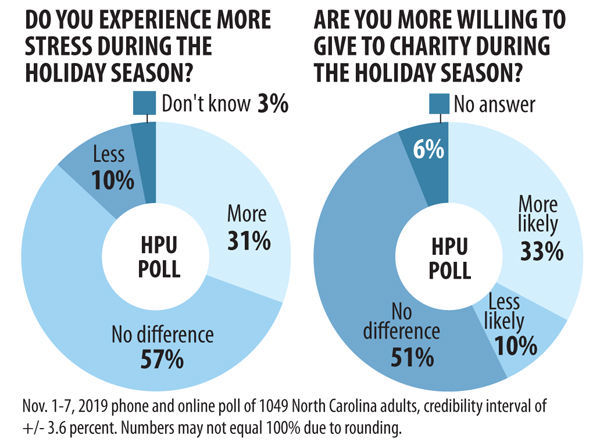 GREENSBORO — With just 26 days between Thanksgiving and Christmas, this year's holiday shopping season is shorter than usual.

It might not seem like it though, with so many stores kicking off sales in early November.

“I think retailers are preparing for that rather than waiting to try and draw customers ... because they know they’ve got a much shorter window to get people into their stores,” said Andy Ellen, president of the North Carolina Retail Merchants Association.

However, with this year's shorter holiday season, some retailers rolled out deals the day after Halloween.

“There was a need to try to push some of the sales early and shoppers responded to that,” said Roger Beahm, executive director of the Center for Retail Innovation at Wake Forest University.

In a survey by the National Retail Federation, over half of consumers questioned during the first week of November said they had already begun their holiday shopping.

Still, the traditional shopping season begins on the day after Thanksgiving, better known as Black Friday. And while many big-box retailers now open their doors on Thursday evening, Friday remains king.

For many, it’s a five-day marathon that runs through Cyber Monday, the biggest holiday shopping day for ecommerce.

“It’s the most intense period in the holidays when people will be doing most of their shopping,” Beahm said.

And shoppers are feeling the pressure.

“Where they usually have an extra week in November, in this case, they are going to be right into December," Ellen said. "I think you will see much more traffic throughout the weekend than you normally do.”

Despite early sales, over a quarter of shoppers surveyed said they still enjoy the tradition of Thanksgiving weekend shopping.

Young adults are among those who can’t wait to head out to the stores this weekend. According to the National Retail Federation, over three-quarters of those 18 to 24 surveyed said they are likely to shop. For many, it’s the social aspect.

Still not convinced to get off the couch? You’re not alone. However, about half of those couch potatoes would get up and shop if there is a sale on an item they want or if someone simply invites them along, the retail group said.

And shoppers are spending a little more this year.

The National Retail Federation predicts holiday retail sales in November and December will be up about 4% over last year.

Where's some of that extra money going? Apparently to the dogs (and cats and other pets).

A 2019 shopping outlook by business consulting firm Price Waterhouse said people will spend an average $76 on their pets this holiday season.

“It highlights the fact that pets have become much more a part of the family than ever,” Beahm said.

Still, what we spend on our pets pales compared to the average $720 spent on a family, according to Price Waterhouse.

While the big retailers take in most of consumer dollars during the holidays, shoppers are turning to small merchants for that special gift, particularly on Small Business Saturday, which falls the day after Black Friday.

After snagging deals on televisions and video game consoles, shoppers head out the next day for more personal gifts.

“With holiday sales making up about 20% of a retailer’s annual sales, a successful holiday season is a necessity for most retailers, but especially independent retailers,” Ellen said.

Beahm said a Deloitte study shows that more than 70% of shoppers this weekend will make purchases online.

“The smartphone is becoming the new mall," he said. "People are shopping on their mobile devices more than ever.”

Convenience of ordering aside, Ellen said there is one reason shopping online is not necessarily an advantage over "brick and mortar" stores.

“With online retailers now collecting sales tax, consumers can be assured they aren’t at a financial disadvantage by shopping at their favorite local retailer,” he said.

Make your phone your sidekick - even in-store

Sure, you're used to comparison-shopping on the go, but analysts say your phone can come in handy in other ways, too.

"If you're going into a brick-and-mortar store, check to see if they have an app," Runyan says.

Retailers, she says, have gotten more creative about where - and how - they dole out exclusive deals. Target's Circle app, for example, frequently offers in-store coupons for specific items, while H&M gives app-users a 15% discount in stores and online. Amazon, meanwhile, has begun rolling out Alexa-only deals that shoppers can access from Echo devices. (Jeff Bezos, Amazon's founder and chief executive, owns The Washington Post.)

Consider what you're buying — and when

Not all holiday shopping days are created equal.

Analysts say there are certain days to score the best deals — as long as you know what you're looking for. Adobe Analytics, which analyzed trillions of U.S. transactions at the country's largest retailers, offers these guidelines:

Black Friday, Nov. 29: Shop for appliances (with average markdowns of about 9%) and sporting goods (6%)

Looking for something off that list? Try waiting until Cyber Monday, analysts say, when many retailers extend blanket discounts on just about everything. Target, for example, historically has offered 15% off everything that day, "which means a toy that's 30% off on Black Friday may suddenly get an extra 15% off on Monday," said Bonebright of Deal News.

But, he added, don't fret too much. "In general, if you're shopping in the week around Thanksgiving you're going to get a good deal," Bonebright said. "Try not to stress about it."

Don't be afraid to wait

The deals are beginning earlier than ever, but that doesn't mean you have to rush to lock them in. In fact, says Rob Garf, vice president of retail strategy and insights at Salesforce, you may be able to score even-deeper markdowns by waiting.

"Holiday shopping has become a game of discount chicken," he said. "Retailers are offering deals earlier and earlier, but consumers are waiting longer to see if they can outsmart them at their own game."

Specifically, he suggests adding items to your online shopping cart - and waiting.

"When you put a handbag and a T-shirt in your cart and leave it there, chances are it'll trigger the retailer to email you a personalized promotion," he said. "The retailer knows what you're eyeing and wants to get you to buy."

The stakes are likely to get even higher right before Christmas, he said, when retailers often offer additional promotions for online orders you pick up in stores.

Have a game plan

First things first: Know what's going to be on sale, Runyan says. She suggests looking through retailers' circulars and Black Friday deals, which are often available online days or weeks in advance. There is likely to be overlap, particularly for popular items like Instant Pots and Ninja blenders, so make note of which retailer is offering the best - and most convenient - deals.

It's also important to note, she said, when certain sales will begin. Retailers are increasingly offering staggered deals - which means that not all Black Friday markdowns will be available right when stores open. Keep a list of what you'd like to buy and when, and act accordingly.

Shop while the turkey is roasting

"If you can only shop one day of the year, make it Thanksgiving," says Michael Bonebright, a consumer analyst for DealNews.com.

Most major retailers, including Walmart, Target and Best Buy, begin offering their Black Friday doorbusters online on Thursday, which means you can log in and finish your shopping in the time it takes to bake a pie.

You're more likely to land the day's deals as there is less competition. An estimated 27% of U.S. consumers plan to shop on Thanksgiving Day, compared to 70% on Black Friday and 64% on Cyber Monday, according to Shopify, which provides e-commerce services to more than 1 million retailers.

Online sales on Thanksgiving are expected to grow 20% this year - compared to 14% growth for the entire season, according to Adobe Analytics. In all, consumers are expected to spend $4.4 billion online on Turkey Day, $700 million more than they did last year.