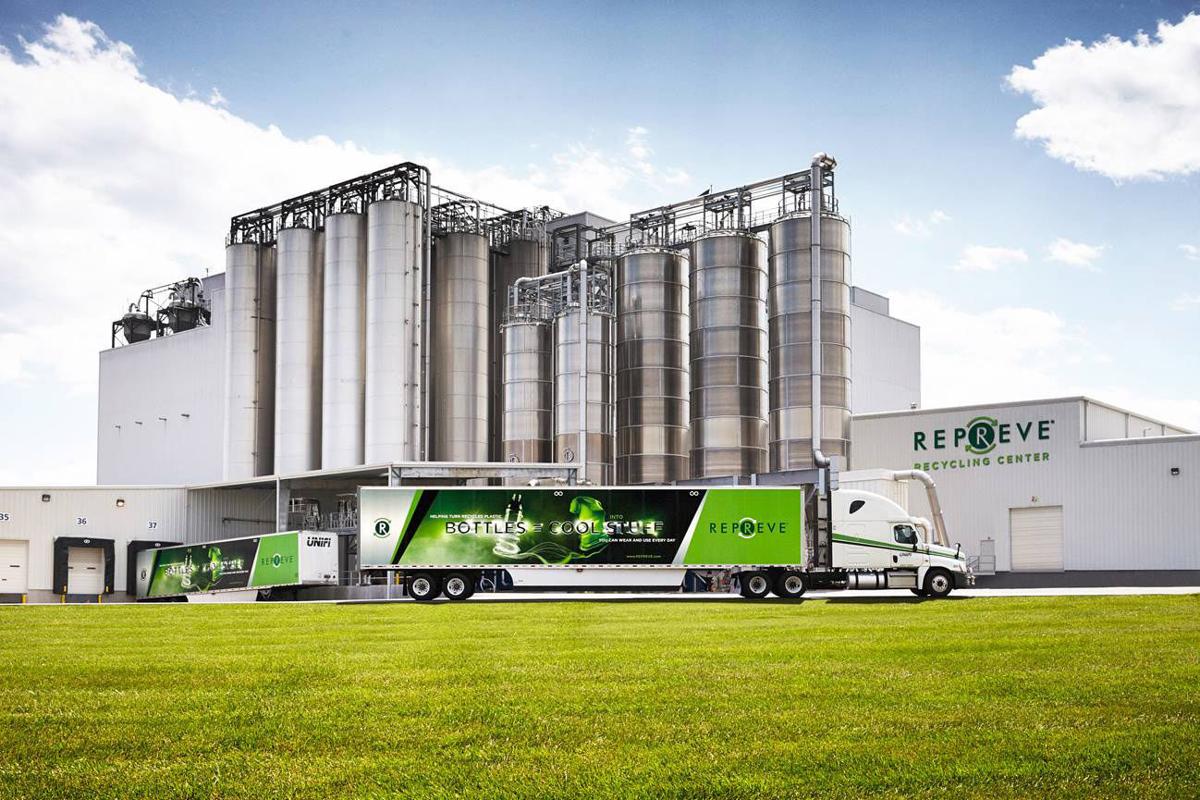 Unifit’s Repreve Recycling Center in Yadkinville converts plastic bottles and post-consumer materials into nylon and polyester fibers. Unifi, based in Greensboro, is the largest private employer in Yadkin County with about 1,000 employees. 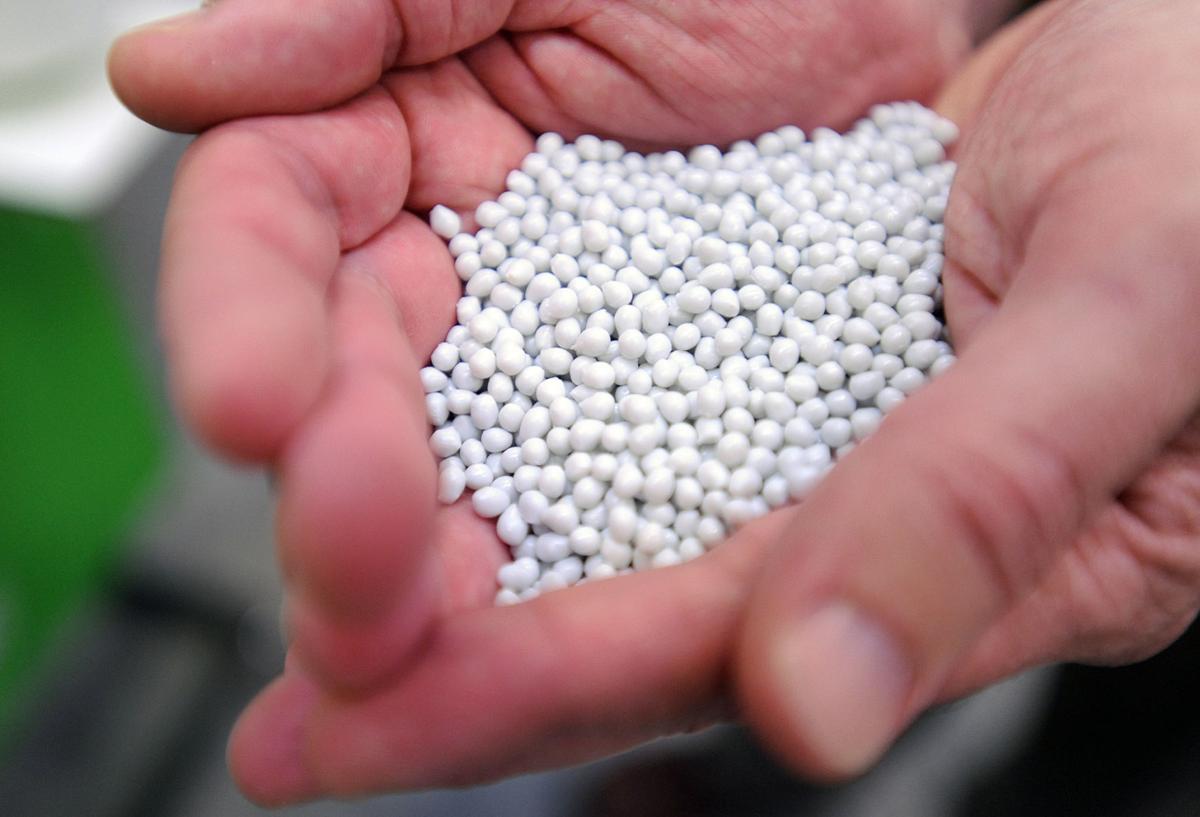 Repreve polyester yarn is made from chips that come mainly from recycled bottles. Unifi Inc.’s plant in Yadkinville is the company’s leading recyled production site. The company represents about 8% of the private-sector workforce in Yadkin County.

Unifit’s Repreve Recycling Center in Yadkinville converts plastic bottles and post-consumer materials into nylon and polyester fibers. Unifi, based in Greensboro, is the largest private employer in Yadkin County with about 1,000 employees.

Repreve polyester yarn is made from chips that come mainly from recycled bottles. Unifi Inc.’s plant in Yadkinville is the company’s leading recyled production site. The company represents about 8% of the private-sector workforce in Yadkin County.

There could well be a “here we go again” response to the recent round of management changes at Unifi Inc. — the latest changes represent the third major shake-up at the company since 2007.

Four of Unifi’s top-five executives have left unexpectedly since December, including former chairman and chief executive Kevin Hall in March. The latest to go was Richard Gerstein, the global chief marketing officer, who left Aug. 30.

Personal reasons and mutual agreements have been the common denominator described in the departures.

Meanwhile, Unifi disclosed in a Sept. 13 proxy filing that its top six shareholders had expanded their combined stake to 52.55% of the company’s 18.5 million outstanding shares as of Sept. 5.

All of which has created a level of uncertainty about Unifi as it has struggled with recent quarterly financial performances not meeting analyst projections, along with higher raw material costs and the impact from Chinese value-added yarn products being dumped into the U.S. from December through July.

Unifi, based in Greensboro, is the largest private employer in Yadkin County with about 1,000 employees. It also has more than 250 employees at a plastic bottle-processing facility in Reidsville.

“It’s highly unusual for a big company to lose 80% of its top leadership team in a single year, unless there’s a good reason for this sort of turmoil,” said Tony Plath, a retired finance professor at UNC Charlotte.

“It’s been a disagreement between legacy management at the company and their hedge-fund handlers about how to restore the profitability of the company in 2019.

“You can tell who’s winning the argument here.”

Unifi has made little public comment about its management transition, with the foremost being Al Carey, 68, and a former chief executive of PepsiCo North America, taking over as executive chairman April 1. Carey replaced Hall as non-executive chairman in January.

Hall was replaced in March as Unifi’s top day-to-day executive by his predecessor, Caudle, 67, who served as Unifi’s chief executive from April 2016 until Hall was hired in May 2017.

The company did not respond to a Winston-Salem Journal request for comment about the management shakeup.

Unifi’s board said when announcing Hall’s resignation and Carey’s appointment in March that it “has a talented leadership team, and we are confident that Al’s and Tom’s proven leadership, knowledge of our businesses, commitment to our culture, and focus on value creation for shareholders have positioned them well to lead the company and to help execute its strategic plan.”

Carey said that “Unifi is a fundamentally strong company with great business opportunities and tremendous talent. ... I believe that the company continues to have tremendous potential for growth and that we have an exciting future ahead of us.”

Unifi and Yadkin — as manufacturing employer and community — are as intertwined as any in the Triad given the company represents about 8% of Yadkin’s private-sector workforce.

Plath said he finds it curious that Carey and Caudle haven’t been proactive in speaking with local officials about the management changes and their plans for local operations and work forces.

Analysts speculated at that time the management change may have been spurred by a top shareholder group, given that Robert Bishop was elected to the board. Bishop is managing principal of Impala Asset Management LLC, a private investment-management company he founded in 2004.

Unifi also experienced a dramatic management turnover in August 2007 when the board of directors fired Brian Parke after four years as chairman and seven years as chief executive. Five board members resigned as part of the transition.

The 2007 shakeup proved pivotal in Unifi’s re-emergence from 10 years of manufacturing limbo to sustainable profitability by fiscal 2010, led by its recycled yarn product Repreve, which comprised 51% of its fiscal 2019 sales.

The management shakeups have come with a significant bottom-line cost for Unifi with a combined $5.24 million in severance payments.

On Sept. 13, Unifi disclosed in a regulatory filing that Hall ($775,000), former chief financial officer Jeffrey Ackerman (resigned in December, $480,000) and former chief human-services officer John Vegas (resigned in March, $400,000) received a combined $1.65 million in severance payouts. The payout for Gerstein has not been disclosed.

Unifi’s largest individual investor is BlackRock Inc. with 2.25 million shares for a 12.2% stake.

Langone, 83, has served on Unifi’s board since 1969 — by far its longest-tenured director. He has been president and chief executive of Invemed Associates LLC, an investment banking firm, since 1974.

“The ‘Big Six’ institutional investors just don’t wield considerable influence over Unifi; they collectively control the firm, its management team and its business strategy, and literally everything that it does,” Plath said.

“The institutional shareholders that control the firm are clearly unhappy with the way the company is being managed and the financial returns that result from this management.”

“Despite the persistent headwinds we faced throughout fiscal 2019, we achieved our fourth-quarter volume and profitability expectations, made progress towards revitalizing our position in the Americas, and exited fiscal 2019 with momentum,” Caudle said in an Aug. 7 statement.

Plath said it’s “their company now, after all, so they have the right to make these kind of decisions.”

Bowman Gray IV, a local independent stockbroker, said the management changes “looks very much like a board of directors taking direction from activist investors wishing to install new players who will bring with them a new culture.”

“Having oversight that not only recognizes the need to have ‘the right people on the bus,’ but additionally, that those people are in the proper seats, should be comforting to shareholders.

“It will be interesting to watch what happens over the next year.”

Chris Smosna, who served as interim chief financial officer until earlier this month, told analysts during the fourth-quarter earnings report that “we have experienced considerable headwinds and missed expectations this year.”

“While our progress in growing revenue remains solid, reversing our bottom-line performance is our top priority.”

Smosna said among the reasons that Unifi management is optimistic about fiscal 2020 is that “customer adoptions from our innovative and sustainable portfolios are significant and new program negotiations are constant. We are seeding the global markets and momentum continues.”

Unifi said final determinations of how much it would receive in anti-dumping payments would be determined by year’s end. The anti-dumping fees are collected by U.S. Customs and Border Protection.

Carey told analysts in its fourth-quarter earnings presentation that “we’ve seen the playing field in the domestic market start to become more level” because of the anti-dumping duties.

“We’re going to continue to monitor the outcomes of these decisions, but we expect it to result in some pretty meaningful opportunities for us in the quarters and even the years ahead, and we’ve really seen some evidence of that very recently in our overall business.”

Christopher McGinnis, an analyst with Siddoti & Co., is one of just three financial analysts who covers Unifi. He said some of the challenges facing Unifi likely played a role in some of the management changes. The recent lowering in raw-material costs and projected revenue boost from anti-dumping payments “should provide Unifi with 12 to 18 months of decent topline growth.”

McGinnis said it’s encouraging that Unifi’s top-six shareholders are taking a long-road approach to their ownership, including continuing to make investments in equipment and technology that spurred its 2009 return to profitability while many of its North Carolina textile peers went out of business or were sold.

On June 20, Unifi said the Yadkinville plant will undergo a major equipment transition by adding new yarn texturing machinery made by a Switzerland technology group. Unifi did not project a net gain of jobs from the new equipment.

Caudle said it’s Unifi’s first major equipment purchase since the 1990s, in part because “there’s not been anything substantially changed in that technology since then, better than what we had.”

That investment follows on the heels of a $20 million investment in 2009 to create a 50,000-square-foot center where the company plans to handle the cleansing of post-consumer plastic bottles to increase product development and production.

“They are investing overseas (Brazil and China) not to reduce production costs, particularly in Yadkinville, but to be closer to where those global customers are,” McGinnis said.

“I know Langone wants the company to go forward and be the best it can be. Shareholders appear invested in making it work, continuing to increase their holdings.

“They have put into place a strong, proactive board, which is very unique for a small market cap company like Unifi,” McGinnis said.

For fiscal 2019, former chairman and chief executive Kevin Hall received $569,237 in salary and stock and stock-option awards valued at $945,482 on the date they were awarded. His overall compensation was $2.43 million. Hall resigned in March and the fiscal year ended June 30.

Tom Caudle, president and chief operating officer, was paid $700,000 in salary, unchanged from fiscal 2018.Al He received stock and stock-option awards valued at $675,343 on the date they were awarded. His total compensation was $1.61 million.

Unifi did not list fiscal 2019 compensation for Al Carey, who became executive chairman April 1. Carey received stock and stock-option awards valued at a combined $400,000 for his role and non-executive and executive chairman.