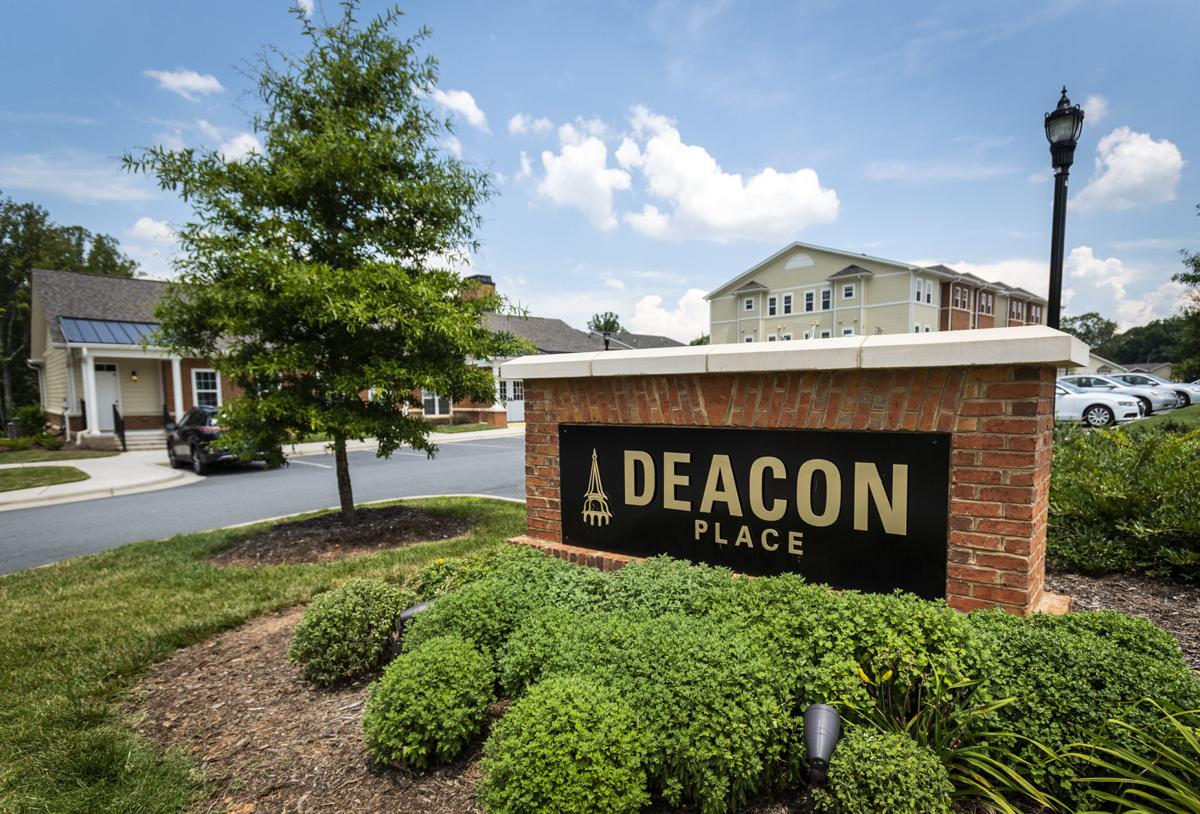 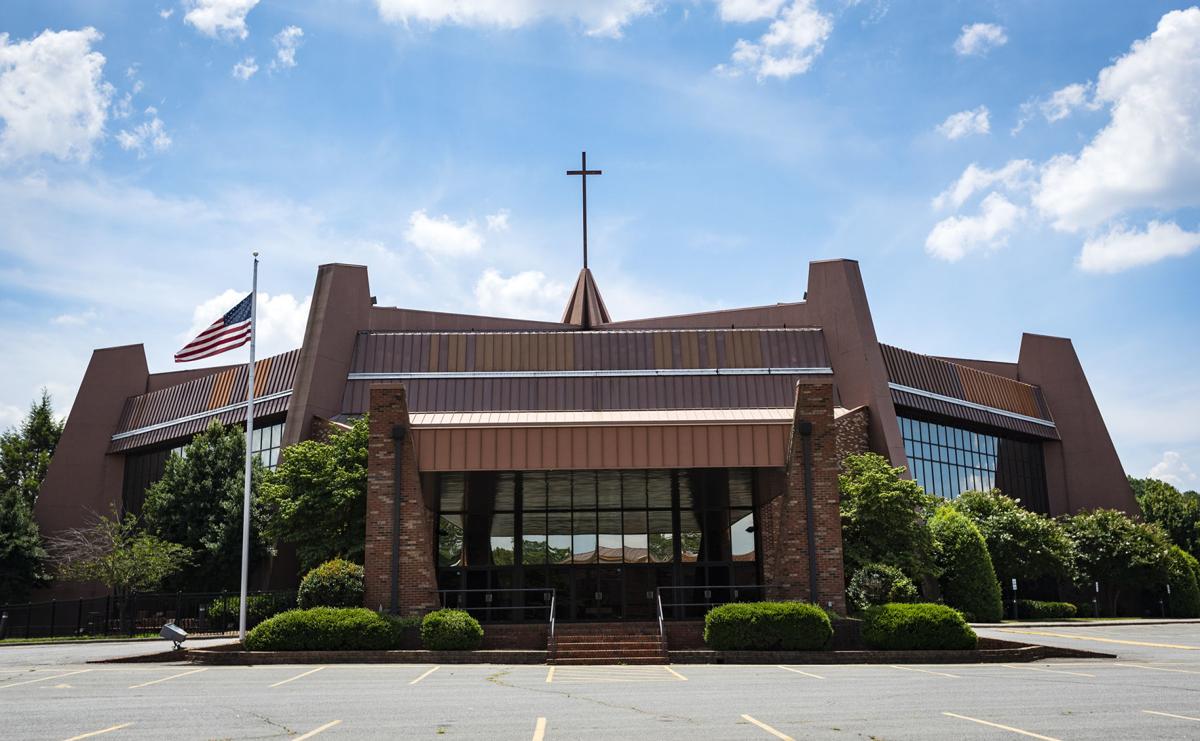 Members of Winston-Salem First church approached officials at Wake Forest about acquiring the property in late 2018 as part of the church’s decision to relocate within three to five years to a site closer to downtown.

Members of Winston-Salem First church approached officials at Wake Forest about acquiring the property in late 2018 as part of the church’s decision to relocate within three to five years to a site closer to downtown.

Wake Forest University will continue to focus on internal Reynolda campus growth in the short term, much as it has since arriving in Winston-Salem in 1956.

However, the university — in particular its Wake Forest Baptist Medical Center arm — will also continue to “be alert to off-campus opportunities that present themselves and make sense,” said Hof Milam, executive vice president at Wake Forest.

“The majority of our growth will be adjacent to campus or in Wake Forest Downtown,” Milam said.

Recent investments in those areas have left the university with plenty on its plate. 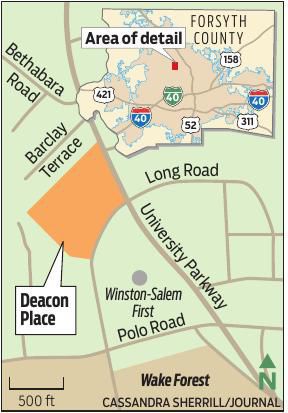 For example, surging demand for student housing led Wake Forest to spend $28.42 million in December to buy Deacon Place, which is near the Polo Road campus entrance.

The gated community, which opened in the spring of 2017, consists of 146,448 square feet in six buildings containing 328 beds, including fully furnished four-bedroom suites and five townhouses in 1,500- and 1,800-square-foot options.

“We’re optimistic that Deacon Place will meet our short-term needs with student enrollment given the three-year residency requirement.”

Wake Forest’s participation in the ambitious $200 million Whitaker Park renovation, the former center of R.J. Reynolds Tobacco Co.’s manufacturing operations, is another example of how the university plans to assist, but not lead, another project.

In April of 2017, Reynolds donated a total of 120 acres, 1.7 million square feet of space, in 13 buildings for a planned mixed-use campus.

The recipient is the Whitaker Park Development Authority Inc., a nonprofit corporation created in 2011 by Winston-Salem Business Inc., the Winston-Salem Alliance and Wake Forest.

The goal is making the campus a magnet for manufacturing, industrial, warehousing and distribution operations, but also possibly retail and residential, said Bob Leak Jr., president of Winston-Salem Business, which will market the campus.

The main development to date is Cook Medical’s decision in June to move its local operations and 650 employees into Whitaker Park by late 2021 or early 2022. Renovation work is set to begin in late 2019.

The company said it is making a $55 million capital investment toward renovating 600,000 square feet and the potential for 50 new jobs. It has been made eligible for up to $4.8 million in local incentives.

Whitaker Park, at its production peak, had more than 2,000 employees, many of whom ate breakfast, lunch or dinner at several nearby diners along Deacon Boulevard and University Parkway.

Wake Forest announced in 2008 plans to redevelop 67 acres along those streets with the feel of a village, featuring stores, offices, residences and restaurants. The goal was investing more than $25 million in the project.

The move appeared feasible given the village would be within walking distance of BB&T Field, then Ernie Shore Field and Joel Coliseum.

However, the first attempt with restaurants on the Deacon Village campus met with failure by May 2010 when three new restaurants and one pre-existing restaurant closed.

The Deacon Boulevard area is a somewhat tough market for attracting diners, particularly after the closing of Whitaker Park for good in 2012, said Ray Collins, president of Collins Commercial Properties Inc.

The area is not close to a lot of homes, where people can go around the corner for a bite to eat, nor is it a Hanes Mall Boulevard-type area that is a magnet for people seven days a week, Collins said. Another problem is that most of the restaurant sites aren’t highly visible from nearby thoroughfares.

Milam acknowledged as much when he said the university “couldn’t have acquired the properties at a worse time for commercial real estate.”

“We’re going to patiently stay in a holding pattern as Whitaker Park takes off with Cook Medical and other tenants. We think Whitaker Park could provide a boost, but the real catalyst will be creating more jobs and attracting more visitors and fans to our athletic facilities.”

Milam said the university and the Whitaker Park authority believe there is opportunity to convert some of the buildings into residential apartments that could serve individuals working at Whitaker Park or those who need moderate-priced housing.

Wake Forest Innovation Quarter has been ranked by Preservation NC as the largest historic redevelopment project of its kind in the state, as well as among the largest involving major innovation districts in the country.

Milam said that while the university and Wake Forest Innovation Quarter are connected at the hip, they have distinct enough missions that they are not overly dependent on each other.

“The Innovation Quarter represents an opportunity to start something new in an urban setting, and we have had promising success to date,” Hilam said.

“We can attract students, such as those interested in engineering, because of the offering within the downtown campus.

“We also have additional space for our graduate school programs to accommodate growth.”

Terry Williams, chief strategy officer for Wake Forest Baptist, said there are a few buildings that Wexford and the innovation quarter could refurbish for new or relocating businesses.

Williams said he is encouraged by House Bill 399, which would give state historic rehabilitation tax credits at least a 10-year extension to 2030, as well as a slight increase in the expense cap. The bill cleared the House on June 6 by 113-5 vote, but has not been heard in the Senate.

The Republican-written 2019-21 state budget compromise proposal includes extending the historic-rehabilitation tax-credit deadline dates to Jan. 1, 2024, for any current project and Jan. 1, 2032, for any projects undertaken after Jan. 1, 2024.

Those tax credits have been instrumental in several revitalization projects in downtown Winston-Salem, with a combined capital investment value of more than $700 million.

“Historic and job creation tax credits can mobilize additional activities in the quarter for those looking to relocate here,” Williams said.

“We had a 10-year plan for building out existing space, and we’re close to occupying all of that space.

“The next three years will be about attracting new companies in traditional and digital health care,” Williams said. “As we do, we’ll be considering the space needs and options.”

Williams said Wake Forest Baptist “will continue to have conversations about growing through mergers and acquisitions.”

The open-ended nature of negotiating a potential medical partnership between Wake Forest and Atrium Health has raised concerns about the local future of Wake Forest Baptist and its medical school.

The groups announced April 9 that they have signed a memorandum of understanding “to create a next-generation academic health-care system.”

Highlighted in the potential partnership is the opening of a second Wake Forest School of Medicine campus in Charlotte — a long-sought goal by Atrium officials and Charlotte civic and elected officials.

“The goal is that upon signing a definitive agreement together, Atrium Health, Wake Forest Baptist Health and Wake Forest University will immediately convene a team to start the work of bringing a modern, innovative, cost-effective and sustainable top-20 school of medicine to the Charlotte area,” the groups said in a question-and-answer posting.

However, the groups have not ruled out a much larger collaboration during their period of exclusive negotiations.

“At this initial stage of memorandum of understanding, we have not defined the details for final structure for the relationship,” Wake Forest Baptist spokeswoman Paula Faria said.

Wake Forest took the same approach with its recent acquisition of the neighboring Winston-Salem First properties.

In late January, Wake Forest reached an agreement to buy the church and its school. Under that agreement, the church will be allowed to stay at the location for at least three years while it searches for a new site.

It was announced April 5 that Winston Salem Christian School will remain at its current location at 3730 University Parkway for the 2019-20 school year, welcome news for families worried that the school would have to leave the site at the end of this academic year.

The school plans to renovate Woodland Baptist Church’s former location on North Patterson Avenue and move in by August 2020.

Gaining ownership of the Winston-Salem First properties became warranted as the university plows through on-campus projects that have yielded plenty of economic spillover, particularly from the 10-year, $625 million renovation initiative that began in June 2016.

Those projects include: the opening of the Sutton Center, an extension of Reynolds Gymnasium; McCreary Field House, an indoor practice center for student-athletes; a building adjacent to Worrell Professional Center for the health and exercise science department; and renovations in the law school, including a central commons.

Wake Forest said it has spent more than $210 million with local and regional construction companies and architecture firms.

Besides hiring local businesses to assist with the projects, the renovation squeeze led Wake Forest to need temporary, or what Milam calls “swing space,” to place faculty and student offices and operations.

“As we renovate, we will move faculty into the Winston-Salem First space,” Milam said. “We already had access to its parking. It’s just become more directly available now.”

Milam said Wake Forest would prefer to be a tenant off-campus rather than a buyer, “to help provide a boost to the other economic development efforts of others.”