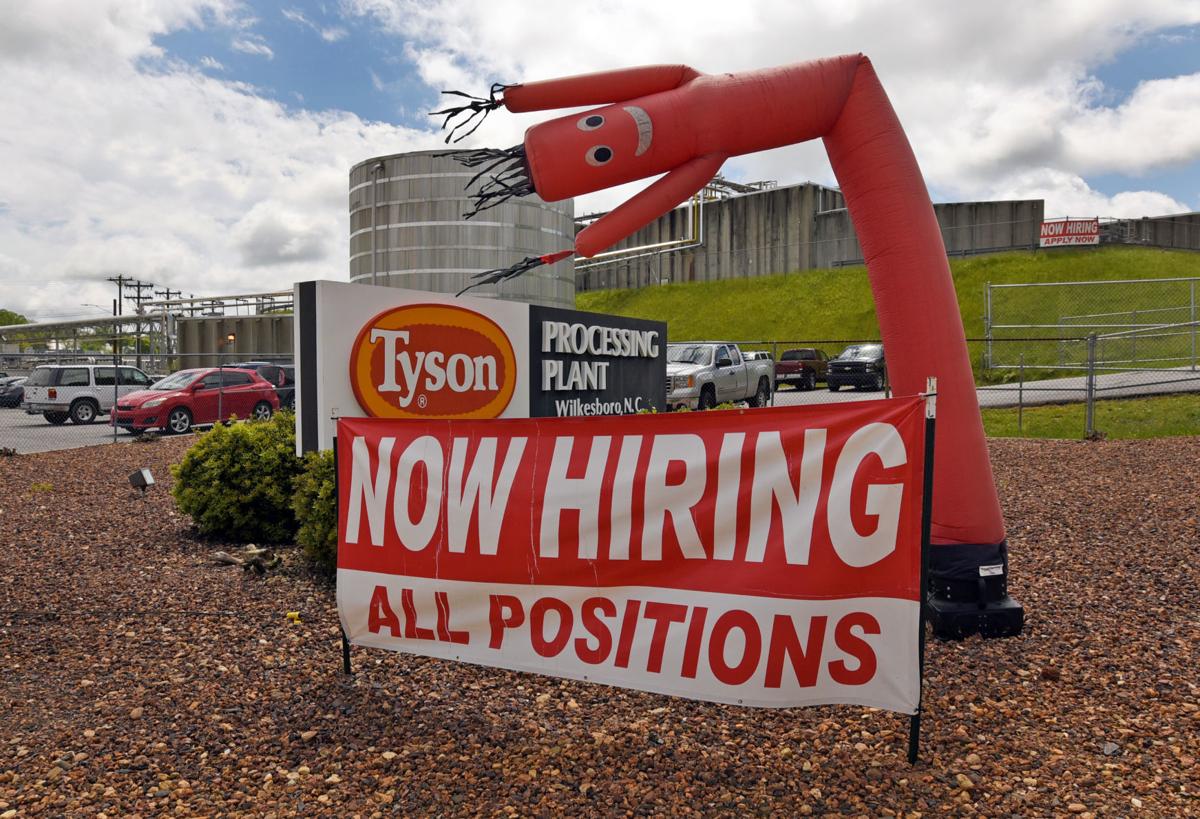 Several ‘Now Hiring’ signs were posted last week around the Tyson Foods plant in Wilkesboro. Employees at the plant or their associates have accounted for a number of COVID-19 cases in Forsyth, Guilford and Wilkes counties, public health officials said.

Now Hiring sign are posted all around the Tyson Foods plant in Wilkesboro, Thursday.

Several ‘Now Hiring’ signs were posted last week around the Tyson Foods plant in Wilkesboro. Employees at the plant or their associates have accounted for a number of COVID-19 cases in Forsyth, Guilford and Wilkes counties, public health officials said.

Now Hiring sign are posted all around the Tyson Foods plant in Wilkesboro, Thursday.

Workday or no pay?

Those are some of the choices that local workers in essential businesses — grocery and home-improvement stores, health care and first responders — have faced daily since the COVID-19 pandemic firmly took hold in mid-March.

In the past week, the regional symbol of the dilemma has become the coronavirus outbreak at the Tyson Foods meat-processing and packing plant in Wilkesboro.

Tyson has more than 1,000 employees in Wilkes County. It is one of the county’s two largest private employers along with Lowes Cos. Inc., according to the N.C. Commerce Department.

The total number of infected Tyson employees has not been released by state and Wilkes public health officials, who cited HIPAA and state regulatory guidelines.

But county numbers for COVID-19 infections give at least some insight into the outbreak at Tyson.

From April 26 through Friday, there were 99 new cases of COVID-19 in Forsyth County.

At least 50 of those people are either Tyson employees who commute to the Wilkesboro plant or close contacts of the employees, all of whom reside in Forsyth, according to Joshua Swift, the county’s public health director.

The ages, gender and ethnicities of the Tyson employees who have tested positive have not been released. Health officials in Forsyth and Wilkes have not disclosed how many employees, if any, are being treated in a hospital.

There also were five High Point residents who work at the Tyson plant or are contacts who have tested positive.

The number of COVID-19 cases in Wilkes County more than doubled — from 21 to 49 — from April 26 through Friday, and many are associated with the Tyson plant.

“Although (the Tyson outbreak) is not accounting for all of the new cases, a majority of the latest cases are linked,” the county health department said Wednesday.

Rachel Willard, director of Wilkes’ health department, told the Wilkes Journal-Patriot that fewer than half of all of the COVID-19 cases confirmed at the Tyson complex are county residents.

Even with the COVID-19 outbreak garnering significant media attention, the plant remains open and there were several “Now hiring” signs at the Tyson complex last week.

Any calls to close the plant were muted Wednesday after President Donald Trump used his authority under the federal Defense Production Act to order beef-, pork- and poultry-processing plants to remain open.

Tyson employees who have tested positive have been instructed not to return to work. People who have come into contact with those workers are being told to self-isolate.

Pressure continues to build on Gov. Roy Cooper and his administration to act sooner than May 8 on restarting the state’s economy, including allowing non-essential businesses to reopen.

Hundreds of people connected with the ReOpen NC movement have protested in Raleigh for several weeks, questioning why rural counties are held to the same stay-at-home orders as the state’s five urban counties where virus outbreaks have been concentrated. Protesters suggest that with social distancing guidelines in place, stay-at-home orders are unnecessary.

But the Tyson plant outbreak and employee commuting patterns provide at least one example of how the virus can cross county lines under the radar.

Cooper has responded to the criticism by saying he and the state will continue to “rely on science and data and facts and consultation with our business community who want to protect their employees.”

State health officials and businesses “just don’t yet have the infrastructure, such as adequate testing, personal protection equipment for everyone who needs it, and the ability to do rigorous contact tracing for people who do get sick,” said Patrick McHugh, senior policy analyst with left-leaning N.C. Budget & Tax Center.

“Until we’re truly prepared, reopening non-essential businesses would recklessly put low-income working people in harm’s way, treat profits as more valuable than human life, and extend the time it will take us to put this pandemic behind us,” McHugh said. “Leaders in Raleigh and Washington D.C. should be focused on providing direct financial assistance so no North Carolinian has to choose between health and economic survival.”

Mitch Kokai, senior policy analyst with Libertarian think tank John Locke Foundation, said that “the people who are suffering the most economically under current circumstances are those who cannot work — not because of some flaw in the capitalist system, but because government is banning them from employing their labor.”

“Under normal circumstances, this would amount to a clear violation of our fundamental right to property and our state Constitution’s guarantee of the right to the fruits of our own labor.

“Yes, the pandemic does allow for government to take extraordinary steps that can infringe on those fundamental rights,” Kokai said. “But that infringement must be as minimal and brief as possible to comply with the compelling government interest.”

Guy Faucher, an economist for PNC Financial Services Group, said that “the longer consumers are stuck at home and workers can’t get to their jobs, the greater the structural damage to the U.S. economy.”

Supporters of re-opening the economy often cite right-leaning talking points that claim stay-at-home orders have led to what they call “the Great Suppression” and a mandated recession.

“The reality is, this is not an either-or situation” between working and worker safety, Kay James, president of right-leaning Heritage Foundation, said in a recent op-ed piece in USA Today.

“A nation decimated by the disease cannot have a functioning economy, and a catastrophic loss of jobs wreaks horrific damage on both mental and physical health,” James said. “Thus, the disease and the economic damage ravaging America are twin foes, and we must defeat them both.”

James suggests “keeping the American people at work and prosperous is what will produce better health outcomes for our citizens.”

“A growing economy has the money for research and development into new medical innovations and cures; has more resources to better educate and train medical personnel; and creates greater capacities of beds, equipment, medicines, and personnel to handle the sick.”

“It’s also an economy where abundance allows us to have the resources to help poorer citizens get the medical help that they need,” James said.

Although North Carolina ended fiscal 2018-19 with a budgetary surplus of nearly $900 million, Senate Republican leaders remain adamantly opposed to any form of expanding the state’s Medicaid program to between 450,000 and 650,000 residents.

The legislative COVID-19 relief package would allow limited Medicaid expansion for unemployed individuals for the costs of testing them for the virus.

Kokai said he believes many of the ReOpen NC protesters are “those who are pushing back against the current economic shutdown, arguing that the lockdown orders are too broad and damaging for the task at hand.”

“They are trying to restrain government overreach.”

“Longstanding barriers to accessing health care, safe housing, good jobs and other factors that affect health have made the COVID-19 outbreak far deadlier for communities of color and low-income people.

“Black North Carolinians are dying at a disproportionately higher rate than their white neighbors, and communities with few health-care options are at particular risk.”

As of Friday morning, there had been at least 3,086 cases of blacks with COVID-19, compared with at least 4,243 whites and at least 1,310 Hispanics. That signifies blacks representing 38% of the 7,785 laboratory-confirmed cases where race has been determined, while blacks comprise 22.1% of the state’s 10.6 million residents.

“People of color and low-income working people in North Carolina are caught in a vicious bind,” McHugh said.

“On the one hand, a lot of the people who lost their jobs first during this crisis work in low-wage industries, like food service, hospitality and retail. The low wages and unstable work environments in many of those industries mean that any loss of income creates an immediate financial crisis.

“On the other hand, the front-line industries we depend on in this moment of need — health care, public transit, agriculture, food processing and childcare — put workers of color and low-income people in greater danger.

“Tying employment to access to health care is bound to reinforce inequities and cannot be the way forward,” McHugh said.

Both Congress and the N.C. General Assembly have been approached to pass legislation that would provide limited legal immunity for essential businesses related to employees who are infected by the virus at work.

The U.S. Chamber of Commerce, National Association of Manufacturers and National Federation of Independent Business are asking for temporary legal and regulatory safe-harbor legislation to curb liabilities for employers who follow official health and safety guidelines, Reuters reported.

“We all agree that decisive action is critical to mitigating the short- and long-term impact of the pandemic,” Thomas Donohue, chief executive of the U.S. Chamber, said in a statement.

“We understand the importance of social distancing and limiting interactions as much as possible as the nation seeks to flatten the curve of the coronavirus.

“At the same time, we must find the right balance so that essential critical infrastructure workers can continue to support public health and safety, as well as the economic and national security of the U.S.”

The liability does not apply “if the injuries or death were caused by an act of omission” by an essential business or emergency response group “constituting gross negligence, reckless misconduct or intentional infliction of harm.”

The language does not prohibit an employee from “seeking an appropriate remedy” under state law for COVID-19-related illnesses or death.