Cigarettes displayed on a store shelf in New York. With a new law enacted in December 2019, anyone under 21 can no longer legally buy cigarettes, cigars or any other tobacco products in the U.S. It also applies to electronic cigarettes and vaping products that heat a liquid containing nicotine. 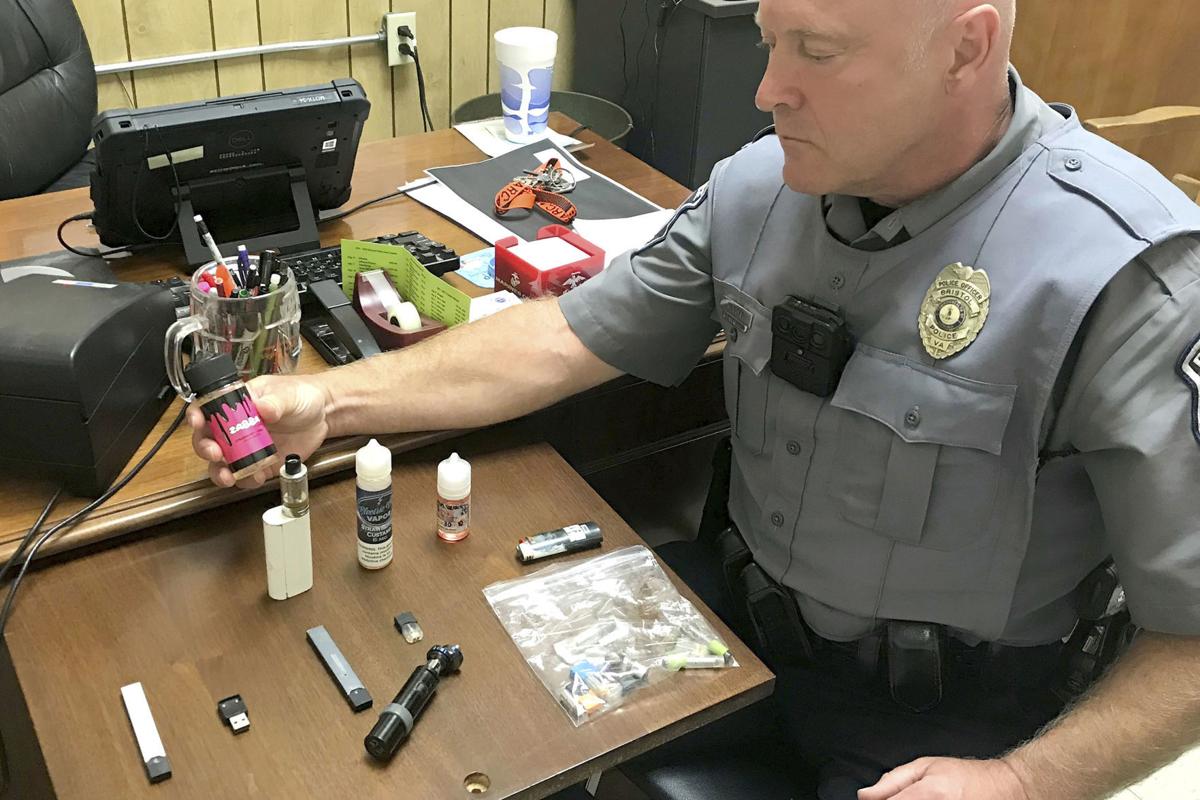 Police Officer Marlin Goff of Bristol, Va. shows some of the vaping products he has confiscated from students at a high school.

Cigarettes displayed on a store shelf in New York. With a new law enacted in December 2019, anyone under 21 can no longer legally buy cigarettes, cigars or any other tobacco products in the U.S. It also applies to electronic cigarettes and vaping products that heat a liquid containing nicotine.

Police Officer Marlin Goff of Bristol, Va. shows some of the vaping products he has confiscated from students at a high school.

The federal government’s cold-turkey policy on tobacco sales for ages 18 to 20 has been in effect about two weeks, to the likely irritation and anxiousness of many of those young adults.

It is still early to determine the ramifications of the abrupt implementation of the age-21 restrictions by the Trump administration’s Food and Drug Administration on Dec. 20.

However, there appears to be little scientific evidence to suggest those nicotine-addicted 18- to 20-year-olds will be any more successful using nicotine-replacement therapy (NRT) products than other adults.

Local medical providers said it could take years to conduct and evaluate studies on how effective NRT products are for young adults as a vaping-cessation product.

Those products, along with quitting cold turkey or obtaining tobacco products illegally, appear to be their realities because neither Congress nor the FDA carved out a grandfather exemption, as was permitted for alcohol consumption in 1986.

All of which signals that nicotine-addicted young adults are likely to struggle health-wise now that they are underage for products they were able to buy and consume legally just 15 days ago.

“It is true that a number of people under 21 years of age who are suddenly cut off from tobacco products are likely to experience withdrawal symptoms,” said Dr. John Spangler, professor of family medicine at Wake Forest Baptist Health.

“This can make people irritable, anxious, tense and fatigued, and make it difficult to concentrate and think.”

Spangler cautioned that for most individuals, nicotine withdrawal “is very uncomfortable, but not a serious health concern.”

“Nor is it a public health concern at the population level.”

Researchers at Oxford University said in a study released Dec. 6 that there was no strategy that provided short-term cessation success, or predicted long-term cessation, for young adults when compared with other adults.

“Despite differences in cessation strategy use between young and older adult smokers, strategy effectiveness largely did not differ by age group,” the Oxford researchers said.

The decision not to grandfather those ages 18 to 20 may lead some of those individuals to turn to illegal or black-market sources for nicotine products.

“Seeking to ban previously legal sales to those ages 18 to 20 without giving viable options to those who are dependent on nicotine is less likely to lead to abstinence than to disrespect for the law,” said David Sweanor, an adjunct law professor at the University of Ottawa and the author of several e-cigarette and health studies.

Matthew Williams, with Stadium Tobacco & Vape in Clemmons, said he is concerned the now-underage smokers and vapers will turn to black-market options “since the FDA has cut them off.”

“If the concern about the vaping illnesses is the THC in the illegal black-market cartridges, I think the FDA has just opened it up for more of those cases from addicted 18- to 20-year-olds,” Williams said.

The federal Centers for Disease Control and Prevention blame vitamin E acetate for the “vast majority” of more than 2,500 cases of vaping-related illnesses, as well as at least 54 deaths.

Jim O’Neill, district attorney for Forsyth County, said he doesn’t believe the age-21 restrictions will result in the need for increased oversight by local law enforcement authorities even with the potential of black-market transactions.

O’Neill said he knows that some 18- to 20-year-olds will get their hands on tobacco products, just as some do now for alcohol.

“I can understand their frustration about not being able to buy a legal product that they could just weeks ago,” O’Neill said. “But complaining about the new law won’t do them much good.

“Law enforcement will have to use common sense about how underage individuals acquire tobacco products.”

“It will be tough to hold the retailer responsible for someone handing off those products to someone underage unless they can prove that was the intent of the person who bought the products,” he said.

When it comes to enforcing the age-21 restrictions on local college and university campuses, O’Neill said campus police will need to be adequately trained on the new restrictions “just as they are whenever a new law goes on the books.”

According to the publication Quartz, there are no guidelines — from federal organizations or medical groups — on how doctors should help young patients who want to quit vaping.

Because the FDA has not approved NRT products for those under age 18, they must get a physician to write a prescription so the drug can be used in off-label manner.

The reason for that policy is simple, but perhaps unrealistic: Teens were not expected to need NRT products because they were not supposed to be using, or having access, to nicotine products anyway.

The American Academy of Pediatrics is in the process of developing youth-related NRT guidelines.

“But for now, the association simply encourages doctors to follow existing guidelines to protect children from tobacco smoke, and to use their best judgement with each individual patient,” Quartz reported.

The N.C. Department of Health and Human Services said 19- and 20-year-olds can obtain NRT products through the state’s Quitline program, if eligible.

“Those 18 and younger (considered as youth) cannot get NRTs through Quitline, but we do have a youth protocol that provides counseling,” DHHS spokeswoman Kelly Haight said.

“We have additional resources for youth at https://www.quitlinenc.com/tobacco-users/just-for-you/teens.html.”

At least 18- to 20-year-olds can purchase over-the-counter NRT products compared with those under age 18. They also are more likely to have access to pharmaceutical NRT drugs.

“Most people who say that NRT (products) do not work for them often are not taking enough nicotine,” Spangler said.

Spangler said his treatment recommendations involve what he calls “combination therapy,” which emphasizes the nicotine patch with an appropriate amount of nicotine, along with nicotine lozenges or gum “on an as-needed basis.”

“This has shown to be safe (among non-pregnant patients without unstable heart disease).”

“This way, the smoker trying to quit gets their 24-hour nicotine needs from the patch, but can get an immediate dose of nicotine at trigger times such as after a meal, during stressful times, while on the phone or when they’re around other smokers.”

Spangler said that for those who can’t access NRT products or don’t prefer them, there are prescription NRT products and quit-smoking drugs, such as varenicline (brand name Chantix) or bupropion (brand name Wellbutrin).

However, Quartz reports “a randomized clinical trial that wrapped up (in 2019) found that varenicline was not effective at helping people aged 14 to 21 quit smoking.”

Chantix has proven to be a controversial quit-smoking aid that may not be suitable for young adults in particular. The Chantix webpage has the following warning:

“When you try to quit smoking, with or without Chantix, you may have symptoms that may be due to nicotine withdrawal, including urge to smoke, depressed mood, trouble sleeping, irritability, frustration, anger, feeling anxious, difficulty concentrating, restlessness, decreased heart rate, and increased appetite or weight gain. Some people have had new or worse mental health problems, such as changes in behavior or thinking, aggression, hostility, agitation, depressed mood, or suicidal thoughts or actions while taking or after stopping Chantix,”

Spangler said there are two low-cost generic medications that help with smoking cessation and tobacco withdrawal — clonidine, which is a blood pressure medication, and nortriptyline, which is an antidepressant.

For young adults wanting to use a prescription NRT, but lacking health insurance, some federal and state-funded quitlines provide those products for free or at reduced out-of-pocket costs.

Robin Koval, president and chief executive of public-health group Truth Initiative, told WebMD that “it’s not clear whether kids addicted to e-cigarettes would see smoking-cessation programs as a legitimate option.”

“For young people, quitting vaping is not the same as quitting cigarettes,” Koval said.

“A lot of young people will say to us, ‘Well, I’m not a smoker. I would never smoke cigarettes.’ They don’t want to be part of a quit program designed for smokers.”

It’s also easier for youths and young adults to maintain an e-cigarette addiction compared to a smoking addiction given the shape of many e-cigarettes and, typically, the lack of smell, Koval said.

Truth Initiative offers assistance to teens and young adults who text “QUIT” to (202) 759-6436. They will receive text messages offering assistance and guiding them to resources, Koval said.

Dr. Douglas McQuaid, a pulmonologist with Cone Health in Greensboro, said the age-21 goal of taking tobacco products out of high schools will be a long-term public-health success.

However, McQuaid cautions that the current 18- to 20-year-olds not grandfathered into the federal regulations may struggle to adjust, both physically and emotionally.

McQuaid said he has concerns that those buying nicotine products from illegal and/or non-regulated sources risk harm from using those products in ways not intended, such as higher heating temperature that can harm lung function.

“Still, the uncomfortable, short-term withdrawals from nicotine pale in comparison with the ability for society to chip away at the 400,000 who die every year from tobacco-related diseases,” he said.

“Dying from lung cancer is a miserable death,” McQuaid said.

“But we were not created by God to inhale into our lungs the products inside every e-cigarette product.”