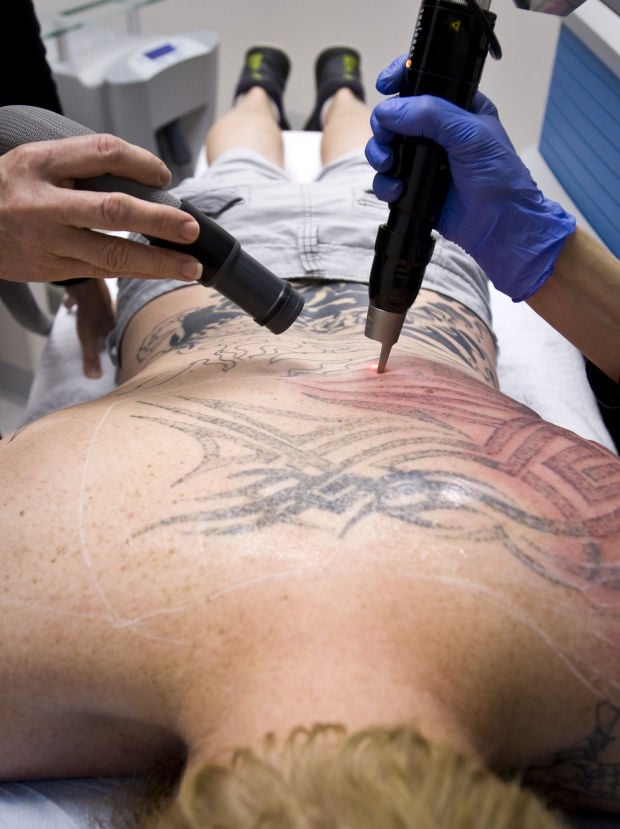 Dr. Anne White, a cosmetic surgeon with the Carolina Laser and Cosmetic Center, works to remove a tattoo from Corey Raynor. 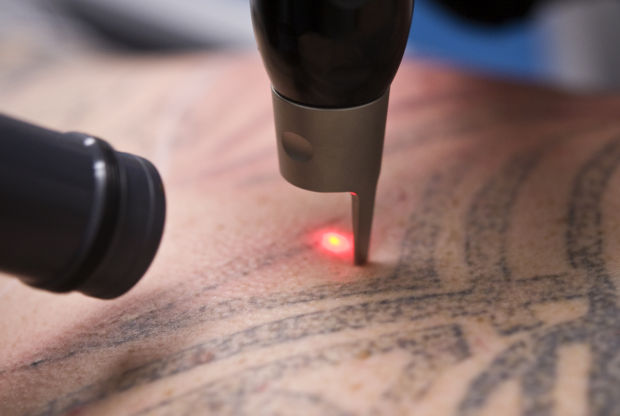 The PicoSure laser works to remove a tattoo from the back of Corey Raynor. 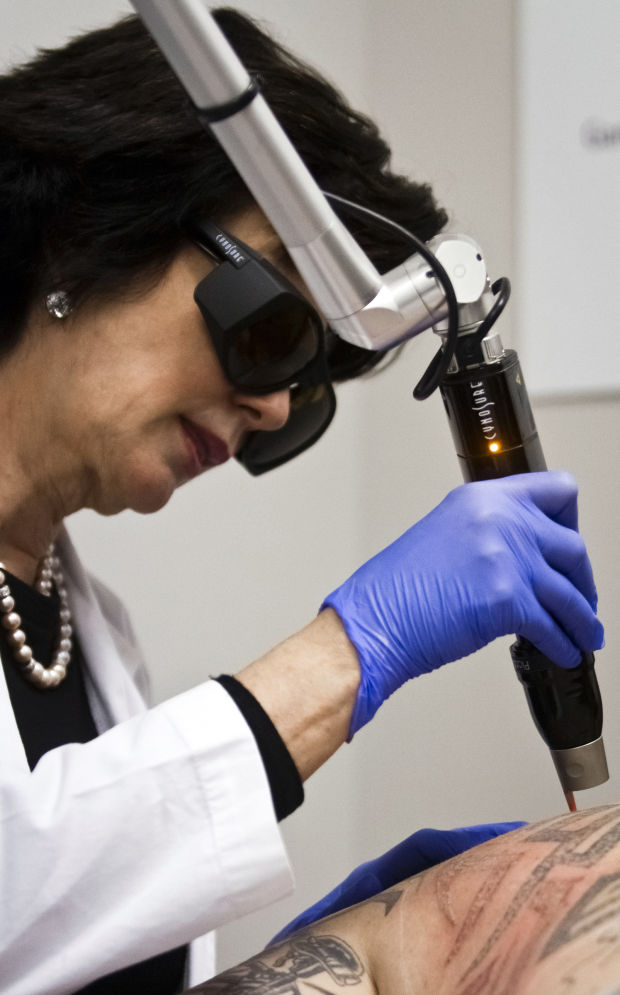 Dr. Anne White, a cosmetic surgeon with the Carolina Laser and Cosmetic Center, works to remove a tattoo from Corey Raynor on Monday, Nov. 18, 2013 in Winston-Salem.

Dr. Anne White, a cosmetic surgeon with the Carolina Laser and Cosmetic Center, works to remove a tattoo from Corey Raynor.

The PicoSure laser works to remove a tattoo from the back of Corey Raynor.

Dr. Anne White, a cosmetic surgeon with the Carolina Laser and Cosmetic Center, works to remove a tattoo from Corey Raynor on Monday, Nov. 18, 2013 in Winston-Salem.

Having to spend more than $3,000 to get rid of a $200 tattoo was an expensive – and somewhat painful – lesson for Corey Raynor, a former U.S. Marine.

Raynor considers the expense and discomfort well worth it, though, saving the money over seven years, as well as undergoing five laser sessions with Carolina Laser and Cosmetic Center.

Have you had a tattoo experience that you regret? Tell us about it.

"Just to have it taken off is a relief because it’s an embarrassment,” Raynor said last week while undergoing his first 30-minute session with the practice’s PicoSure rapid pulse laser technology.

Dr. Anne White, top executive at the Kimel Park practice, said her company is the only medical group in the Triad offering the technology, which was approved early this year by the U.S. Food and Drug Administration.

White said the equipment and training represented more than a $350,000 investment for the practice, which began offering the service Nov. 18.

Raynor, now 28, said he was talked into getting the tattoo on his left shoulder by some buddies “with alcohol involved” before he enlisted in the Marines in 2006.

"It was the first one done by that tattoo artist, so it was cheap and I was his guinea pig,” Raynor said. “It was horrible looking, and I regretted it ever since I got it.”

A local anesthetic is provided before the removal procedure, as well as a hose that provides a cooling element to the skin as the laser is being used.

Raynor described the feeling of the laser working on his tattoo as like “the flame of a lighter being moved right above your skin.”

"I’m just trying to think happy thoughts during the process,” he said as he winced.

The PicoSure system represents an improvement over previous tattoo-removal technology because it breaks down the pigment of the ink into much smaller particles, making it easier for the body’s immune system to absorb it.

The system delivers short-pulse bursts of energy to the skin in trillionths of a second. That allows it to do a better job at breaking down harder-to-remove blue and green ink, according to FDA reports.

Because the PicoSure system produces more energy, it reduces the typical number of sessions required from 10 to five. Length of the sessions varies from 5 to 30 minutes depending on the size, location and density of the ink used.

Reducing the number of sessions required typically doesn’t represent a lower overall out-of-pocket cost to the consumer since the PicoSure sessions are more expensive. Most insurers don’t cover tattoo removal, as they consider it as a cosmetic procedure.

The total treatment time span can be six to eight weeks, White said.

Because Raynor still serves as a contractor to the U.S. military in the Middle East, the timeframe for completing his tattoo removal will be longer.

According to CynoSure, developer of the PicoSure system and a publicly traded company, there are three health providers that offer its service in North Carolina. The others are located in CynoSure facilities in Charlotte and Huntersville.

"FDA clearance of PicoSure is a major milestone that caps nearly a decade of research and development at CynoSure to commercialize the world’s first safe and effective pico-second aesthetic laser,” Michael Davin, CynoSure’s president and chief executive, said in a statement.

Gaining FDA approval of the PicoSure system, along with a recent acquisition, has bolstered CynoSure’s fiscal 2013 revenue to $151.5 million through Sept. 30, although it had an income loss of $9 million for the year to date.

"PicoSure, our new flagship product for removal of tattoos and benign pigmented lesions, continues to be well received by physicians and consumers,” Davin said.

White said she didn’t jump on the PicoSure bandwagon, but reviewed the FDA research and talked with doctors who began using the technology earlier this year.

"I feel my obligation is to provide the Triad with the latest and safest tattoo-removal technology,” White said.

CynoSure said its research has found that the average laser tattoo removal patients are college-educated and between the ages of 24 and 39.

White said that closely reflects her demographics for tattoo removal clients, with the typical individual being a single woman wanting a small- to mid-sized tattoo removed from her hand, neck or other visible body areas.

"Some want them removed because it may hinder their ability to get a job,” White said. “Some have become mothers and it doesn’t fit their lifestyle anymore.

"Some learn that some tattoos, especially over areas where the skin stretches more, can morph into shapes that make the tattoo less attractive. Some had someone’s name tattooed on them, and that person is no longer in their life.”

White expects the PicoSure system will allow her practice to more than double its daily tattoo-removal business, from three to seven patients.

Even with the significant out-of-pocket expense, White said she expects demand for her services to increase over time as the number of people, particularly teens and young adults, getting tattoos increase.

Consumer research studies have shown that nearly 20 percent of the 45 million American with tattoos eventually regret their decision. Some patients say they have grown tired of tattoos limiting clothing options, particularly at work, or they don’t want their children to see it.

Another cultural development working in the favor of tattoo-removal providers is the recent decision by the U.S. Army to ban soldiers from getting tattoos below the knee or the elbow.

According to a September article in Time magazine, the other military branches have policies that say tattoos can’t be “excessive.” For the Air Force, that means a tattoo c annot cover more than 25 percent of an exposed body part, like a forearm, when wearing any uniform.

"That should mean additional business for us for those people wanting to enter the military but have non-compliant tattoos,” White said.

The practice offers a 30 percent discount to military personnel, police officers and firefighters. It also provides a 50 percent price discount on the fifth of a five-session package. It provides financing through a third-party credit vendor.

Not having another one

Surprisingly, White said she is not anti-tattoo even though removing the ink could represent 20 percent to 30 percent of her business over time. She said liposuction has the biggest client demand.

White said she has had consultations with clients and their preferred tattoo artist so the artist can understand what areas are being removed as part of a new tattoo being put in its place.

"If you think like the person wanting the tattoo, that it is an expression of art and their lifestyle choices, what we do for that client is give them a chance to makeover a previous expression with a new expression,” White said.

Raynor stressed that his first tattoo experience didn’t turn him off having body art. He still has an eagle on his lower back and a “sleeve” on his left arm – a term referring to a tattoo that covers all of his arm. He said his wife doesn’t mind his remaining tattoos.

"I don’t know if I would have done this, have the first tattoo removed, if he had done a good job,” Raynor said.

"I know I’m not having another one put in its place.”